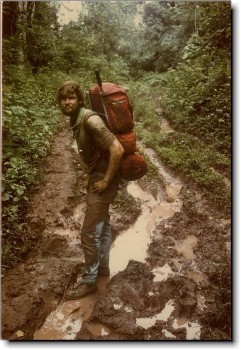 Jack: I don't know how long this post will be but I have a lot to say. I will try to be brief but suspect it will run on into the next time zone. Last post we said there wasn't much more to post, pre-trip but well, some thoughts started buzzing around in my head and I figure I can only shake them off by writing. I think it started when I read about Haydukes plight with his employer and the contrast that Lisa had with hers.

This afternoon Barb and I were doing our normal training walk along the beach, six miles. It is a wonderful walk along the beach from Encinitas southward toward Solana Beach. No hills so that part sucks as we really need some quad work but nevertheless, a six mile walk on the beach is something special.

So, we are walking along the beach and I came to this big (read REALLY BIG) realization that in a bit over 15 years from now, I will be 80 years old! Fifteen years, shit, I'm going to be 80, that is like hardly any time at all. Barb tried her best to make it sound like a long time but really, I fear fifteen years will pass like a fast food order at McDonalds.

Where were we fifteen years ago? Let's see 1996. - Lisa Marie Prestley filed for divorce from Michael Jackson, Heidi Fleiss, remember her? She went to jail. Apollo 13 with Tom Hanks was the big movie. Netscape Browser 3.0 was released (you must remember Netscape), and the Olympic games opened in Atlanta, GA, (remember the bomb?). I'll bet that most of you reading this (assuming you are over say, 30 years old) remember 1996. It was not an especially newsworthy year BUT it was 15 years ago. And that same period from now to the future will put me in the ranks with the Octagenarians. And that really sucks! I have so much more on my plate beyond the PCT and I am running out of time.

A few days ago, I was looking through some other journals and I happened upon that of "Mother Goose". I noticed at the bottom of the page the signature which read "Life is not a journey to the grave with the intention of arriving safely in a pretty and well preserved body, but rather to skid in broadside, thoroughly used up, totally worn out, Pepsi in one hand, backpack in the other, yellin' "Holy Sh**, What a Ride!" Mother Goose, thanks for the nice hiker rendition of a very meaningful quote.

Maybe it was this statement that got my mind rolling and, damn I have had one "wild ride" so far but I'd like NOW to be the first drop on the roller coaster rather than the runout at the end.

Barb and I talked about getting old and being able to continue to do things that you want to do. And, this trip, the PCT is one of those things that you ideally should do in your younger years. Correct me if I am wrong but a Google search says that the oldest person to thru-hike the PCT is Billy Goat (George Woodard) in 2008. He was 69. Damn, that is only 4 years older than me.

Do I have a chance to complete this thing? - ABSOLUTELY!

I don't want to ramble on about this. But I do want to say, especially to all you younger folks out there (which is probably all of you, as, heck, I am almost 80!) LIVE YOUR DREAMS! Quit your job if you have to but live your dreams. Life is short. IT REALLY IS SHORT. Make a bucket list, prioritize the items on the list and find a way to check them off.

Granted, I have been living my dreams since I was 10 (I think). I lived in Yokosuka, Japan as a navy brat. 1956, the base was honeycombed with caves from the war and guess where I was? I knew those caves like no one else - the MPs would sometimes find me and chase me through those caves - I never got caught. They have since been sealed up.

In 1969 I landed my first job out of college as an electrical engineer for a big aerospace company. I was working on the top stage of the Minuteman III missle system (Barb still calls me a "rocket scientist"). I hated wearing a tie, being number 518991 (yes, I still remember that badge number) and, it was all about profits and schedules as they worked us six days per week - "Sorry, no time off until this project is completed". So, after a year and a half, I quit. I handed in my badge, threw my tie in the trash, went shopping for a new backpack and headed south overland to Tierra del Fuego.

It was one of those adventures of a lifetime. I wasn't always travelling alone and at one point hooked up with a wild guy from Maryland named Phil Cannon. He and I set out through the Amazon jungle in Peru. We hiked hard with machettes from Satipo to Puerto Ocopa. We figured "Puerto" must be a port with boats but not this time of year, the river was raging too much.

So we had some local indians build us a raft (cost us $ 22), and we floated and paddled for 100 miles to Atalaya (on the Rio Tambo). It was a wild ride and yes, we were "skidding sideways". We never planned it, just did it. I think my pack was about 50 pounds, loaded with oranges, hard bread and spam (no stove then). At Atalaya the Tambo joins with the Urubamba and the water slows to a crawl. We liberated our raft and rode public transport boats down river to Iquitos, then flew home. I think they have roads through that area now.

In '71, I was burning through my savings as I returned home but almost immediately took off for Europe and traveled the continent with my good friends Johnny, Nancy and a hitchiker named Joe Boud who helped share fuel costs in our VW bus. I think that was three more months. We got so close to being arrested in Morocco - but that's another story for another time.

Still skidding sideways, I married Evie in 1974. In 1975, we sold or stored everything we owned and went overland around the world for 13 months - Europe, Egypt, Turkey, Iran, Afganistan, Pakistan, India on and on, ending up at my parents place in Japan. We were broke (again) but the wonderful parents bought us plane tickets and flew us home. That trip cost a whopping 8,000 dollars (for both of us!). It is way too dangerous to travel there now.

(Side note: Ev and I split in '79. She got remarried to a great guy, Ed - We are best of friends and still party with them on a regular basis.)

And now Barbara. When I met her, she had just completed an ascent of Rainier and was seriously planning a foray up Denali. I dangled a carrot in front of her - "Would you rather climb Denali, spend a lot of bucks on very expensive gear, freeze your butt off, and still not be assured of the summit? Or, go to Bali for a month, dive the clear warm water and surf the endless summer?" She thought on that one for about 1.2 seconds.

Buried deep in the back of my mind, that statement haunts me. Spend a lot of bucks, freeze your butt off, not finish the PCT and have to eat dehydrated meals for the next 3 years. No, we won't go there.

I have to say that Barb and I have "skidded sideways" more together than all of my cumulative experiences up to then - hiking, rock climbing, canyoneering, cave exploring (we're talking musty, very dark, old caverns in Thailand ). We have been together now for 19 years - maybe I am at the halfway point in this marathon skid? Or can I extend it out to an Ultra, like the Western States 100?

OK, enough of the rambling - I think you get the picture. Hayduke quit his job and is living his dream. You others out there, think about this: If you passed away today, would you feel like you did most everything you wanted to in life? Or even some of the things? Before you know it you will be 80. Get out there and whatever is on your list, do it.