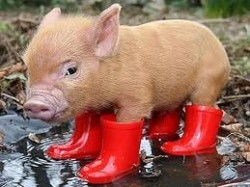 The Pigs Are Coming!

It's final. The pigs are doing the PCT with us!
Barb says they would be so upset if they couldn't come and boy,
the destruction they would cause around the house if they wern't invited along.
They would probably huff and puff and blow our house down!
So the pigs are coming! There are only two of them but...
Once upon a time there were three little pigs. Very, very little pigs.
They lived in a crappy straw house that would sway in the wind like a willow tree.
Their names were Chicharrón, Nitas, and Car. Nitas is always introduced before Car, never ever the other way around.
One day, Chicharrón woke up to a nice sunny day and said to Nitas and Car. "I think I am going to head down to the market, wanna come?"
Well, Nitas was in the middle of a fine roast beef sandwitch, and Car had been drinking way too much water that morning and hence was spending a lot of time in the bathroom.
So, both Nitas and Car declined the invitation.
Undaunted, Chicharrón went to market, Nitas had Roast Beef and Car was going Wee Wee Wee in the home.
Later in the day, Nitas and Car begun to worry. Chicharrón had not returned home. It was getting dark and where was Chicharrón? They stuck their little (very, very little) snouts out the door to see if they could catch a scent of the Chicharrón. They could not smell their friend but only a hint of Chile and Lime flavorings waifting in the evening air.
Chicharrón never came home.
Months passed and one day, a big winter storm rolled through their village and blew their house down. Now homeless, Nitas and Car had nowhere to live.
To make matters worse, Nitas was chased around by a big bad wolf but was eventually rescued by Pig-Zilla (but that's another story).
To spare you all the grief and details of this terrible drawn out tale, Nitas and Car eventually ended out living with Jack. That was about 25 years ago.
Having survived "the market", the storm, and the wolf, Nitas and Car became somewhat of a good luck charm. Whenever Jack went on a trip, Nitas and Car were always with him.
They went on winter camping trips. They went on road trips. They went on a surf trip to Bali. They have been to the top of Telescope Peak in Death Valley and over some very high peaks in Nepal. They went on a road trip in Alaska and they even toured the Casa Noble plantation in Tequila, Mexico. Yi - Yi - Yi !
And they want to do the PCT. - BAD. If they don't get to go, they will likely tear the house apart (they live indoors).
Jack: "Barb, can Nitas and Car join us on this adventure of a lifetime? Pleeeeeeeze?"
Barb: " How much do they weigh and who will carry them?"
Jack: "Well, if we downgrade their brick house to something smaller and plastic, I think we can get them along at about four tenths of an ounce. And you know, they like so much to play "Pigmania", we could win treats from unsuspecting hikers.
Barb: "Treats? How does that work?"
Jack: "Well, first everyone anties up a treat, like a snickers bar. Then you throw Nitas and Car like dice onto a hard surface. However they land, you either get points or you lose your turn. The first player to 100 points gets the booty. It is winner take all!
Barb: "OK, Nitas and Car get to join us as long as the booty is not pop tarts!"
Jack" "Ok, promise, no pop tarts (but I didn't say Little Debbies)
And so, Jack's faithful pigs, Nitas and Car will be joining us on the trail. They love having their pictures taken so you will likely see them along the way. And, if you are a hiker at an evening camp, come on over for a game of pigmania.
If you are hiking the trail this year, bring some extra treats!