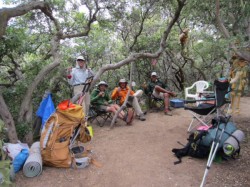 A vortex in hiker terms is like a black hole in space. It sucks eveything in and lets nothing escape.

When you get to mile 471.6, you come across the Anderson cache. You begin to feel the pull of the vortex.

The Anderson cache is an oasis of beach chairs, coolers and even cooler stuff scattered about - like the (plastic) skeleton hanging from a tree.

In the cooler are ice cold beers and soft drinks. We stopped for a brew with some other hiker friends.

If you don't decide to camp at the coolers and drink all the beer (it has been done!), you will continue on. Eventually, you will pop out into civilization, a highway (called San Francisquito Canyon Rd.) at mile 478.6

Below the PCT sign, you will read a note. It says "There are two types of PCT hikers. Those who visited the Andersons and those who wished they had". Which ones would we be? The vortex was drawing us in.

Over at the ranger station, across the highway were Burt, Ernie and Scout Meister - they were waiting for a ride to the Anderson's house (called "The Casa de Luna" or house of the moon).

We are game for most anything and heck, it is the PCT experience so, OK, we would go. Or was it the vortex putting these words in our mouthes?

Five minutes later, a friend of the Anderson's named Judy swung by with her van and we were all on our way, heading toward the vortex. We could hear the faint theme from the old TV show "The Twilight Zone" seeping out through the car radio.

There is a fifth dimension, beyond that which is known to man. It is a dimension as vast as space and as timeless as infinity. It is the middle ground between light and shadow, between science and superstition, and it lies between the pit of man's fears and the summit of his knowledge. This is the dimension of imagination. It is an area which we call The Twilight Zone. — Rod Serling

Two miles up the way, we arrived and piled out of the van. There was a group of rowdy hikers sitting around more beer coolers in the driveway. All were wearing Hawaiian shirts. And there, off to one side was WRANGLER! We had finally caught up to Wrangler and his sidekick Gunner. How long had he been here? How did he get here?

Turns out that Wrangler and Gunner were trying to avoid the pull of the vortex. They hiked past the road and an additional eight miles further along the trail. But the pull of the vortex was so great that even on the next highway, Terrie Anderson was there and snatched them up and hauled them back to the Casa de Luna.

Joe and Terrie are good people. They want as many hikers as possible to come visit. Last year there was no maximum limit on the number of days one could stay. Some hikers never returned to the trail. Now, they try to limit the stay to two nights but, if they get attached to you, then, well, like the verse from Hotel California: "You can check out anytime you like, but you can never leave", you could still be camping in their back yard when the class of 2012 shows up next Spring.

We donned the required Hawaiian garb and grabbed a beer. We were in a time warp.

Terrie Anderson is like Mama Cass from the Mamas and the Papas. Joe, her husband is like a stage hand from Led Zeppelin. Their house backs up to public forrested land. You can walk forever past the back yard and pitch your tent. TK, who was around during the Haight Ashbury days fell right into the vortex. "Wow, like a hippy crash pad in San Francisco in 1971" Boo Boo was tettering on the edge of the big black whirlpool.

Terri and Joe cooked up a great meal. Taco salad - Throw a bunch of chips on your plate, smother it with melted cheese (more like velvetta), add a heaping dolop of hamburger, beans, lettuce, tomatoe and whatever else there is and you have one high carb dinner.

After dinner around the "fire ring" in the dirveway, we heard the story about how it all started 12 years ago. Seems Joe had a hankering for chicken soup and Terrie just happened to run into a couple of thru hikers rooting around town looking for a food store. Joe's chicken soup (that served 12) was a big hit for these two hungry thru's and hikers have been coming to JnT's ever since.

We camped in the back yard with about 15 other people. When we woke up the next morning, most of them had gone... Or had they? Is there some alternate universe here that reroutes you back to the Andersons whenever you try to leave? We looked around. Seems like some had disappeared but many others were still milling around.

Pancakes for everyone this morning. Boo Boo wanted to hit the road asap. TK was looking at all the pictures hanging on the walls. A car was leaving in 5 minutes. Boo dumped both of the packs in the cargo hold, assuring us of a ride but, we wern't allowed to leave until we posed for a photo in front of the Class of 2011 banner on the front of the garage.

Joe had the camera. A moment just prior to the shutter release, Mama Cass turned and mooned us all. What expression was on our faces in the picture? We will never know. We jumped in the van, with Terrie driving and headed toward the trailhead. As we neared the junction, we could feel the pull. Two new hikers had just popped out onto the highway. Terri rolled down her window. "Hey, how about a ride to the Casa de Luna"? They smiled and politely declined. She tried again and again, they said no.

We jumped out of the van, gave Terri a big hug and thanked her for everything but she was eyeing those two hikers who were heading away.

"Don't forget, there are two types of PCT hikers" "Those who visited the Andersons and those who wished they had!"

The hikers seemed to be vortex proof as they disappeared around the first corner.

Wrangler and Gunner were still there. Would we ever see them again?