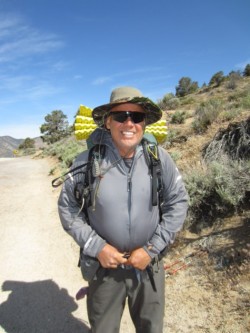 We deviate and talk about WATER.

There is a bus that leaves from the senior center in Lake Isabella every morning at 6:30, 8, and 9:15 (check the times). The bus stop is only a 10 minute walk from the motel, you can go all the way to Onyx for a buck. Takes about 30 minutes and you get to see a good part of the area as it doesn't take the direct route.

We were on the 8 am bus along with a hiker named Trawler Cat. TC is a retired Colonel in the USMC (funny, lots of Marines doing the PCT). He has a great technique for getting rides. At Onyx, he went over to a group of guys and offered to pay twenty bucks for a lift to Walker Pass. An 80 year old man named Ted Huerling took him up. Meanwhile, TK and Boo Boo caught a ride with a fireman. But we were let off at the FD Station some five miles and 2,000 vertical feet from the pass.

Not more than 10 minutes had passed and along came Ted and Trawler. They stopped, we jumped in and before you knew it, we were back on the trail. We hiked with TC for the next two days and really enjoyed his company.

We missed the episode but later this afternoon, Trawler Cat practically stepped on a big 'ol Rattler. The snake tried to strike him and just barely grazed the back part of his pant leg (ankle high). Well, TC of course let out a big scream, rolled to his left, bounced off the trail and rolled down the embankment for about 15 feet. Miraculously he was unscathed but shaken (he called it a "short stainer").

After about 5 more minutes, the snake moved on and he could retrieve his hiking pole that conveniently had fallen right on the snake. He tells of all the details here(June 8 entry). TC's hike ends in Kennedy Meadows. We will miss you TC.

Now, as you may or may not know, Tequila Kid has been recording water source locations and flow qualities and emailing this info to AsABat for the water report. This page is as good as any to talk about Water. TK is a child of water and has a Water Brother in LA (Yo, JES!), so here is his piece on the water report and the water angels.

This page is about water.

It was written earlier but had no good spot in the journal until today.

The water report told us that the last water for many miles would be located at mile 608.2. This was yesterday. We passed up some bomber streams at 607 - why carry water when the next source is only a mile away.

We arrive at 608.2 and the stream is little more than a trickle. Hiking back 1.2 miles was our of the question and since the next water was at 616, a cache, we had to load up.

We would be camping before the cache and preparing dinner so we took on 2 liters each plus our two malto bottles.

Later at camp, we discovered that the water had a slight metallic taste. Would we have walked an extra 2.4 miles for better water? Probably not. You could easily mask the taste with additives.

Today we hit the trail at 6 am. We knew we would be at the cache in about 5 miles. It was mostly downhill.

These water caches are truly a beautiful sight. This one (616) and the next one (631) are maintained by an angel named Mary Barcik of Welden, CA. Thankfully, she is very serious about keeping them well stocked.

This stretch is one of the driest on the PCT. Without these two caches, one would have to carry enough to cover about 35 miles (unless you deviate off trail to an obscure source). And it can be very hot out here. We took on three liters each from Mary's caches and we suspect that most others did as well. Thank you Mary Barcik.

It was cold and windy for us today but, it could have been 100 degrees. Without the cache how much water should one carry? A guesstimate would be three to four gallons per person per day. To cover this 35 mile stretch, one might need six gallons. That would equate to over 40 pounds of water.

How would a hiker know that there were caches of water just sitting there at mile 611 and 631? And what if the bottles were all empty?

Well, there is an online document put out and regularly updated by AsABat (trail name). Maybe some of us take this for granted but this water report is one of the most important if not the most important data resource for every PCT hiker. Ask any hiker - they will have one in their pocket. Ours came from the Saufley's in Agua Dulce. Our's is dated but still mostly accurate.

It took metallic tasting water, followed by a very long dry stretch to really realize the importance of the water report. Thank You, AsABat!

Note: In the Sierras, water is plentiful so the water report ends at Kennedy Meadows. We have now thru-hiked the entire Water Report! - Sections A thru G.