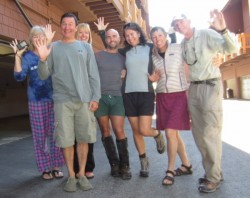 we said goodbye to the Mammoth angels

Guess " I " will be writing this in the first person for now - Boo, I miss you already. You would love it here at Boris and Caren's home.

Along with the KIwis, Duncan and Barb, we said goodbye to our great trail angels in Mammoth and jumped on the transit bus, heading for Reno.

On the bus was a girl who lost her pack in a river. She had tied a rope to it and attempted to throw it across the river while her friend, on the far shore would reel in the pack by pulling on the rope. Well, the pack hit the water and as you might guess, the current took it away, rope and all. An interesting twist, the pack was found by some other hikers. They couldn't cart the pack out but took the valuables and ID and turned them in to the Ranger Station. She got her valuables back and her pack is still sitting there, by the river bank. She wasn't going back in.

On the bus, we paid 17 dollars for a very nice long ride to the junction with highway 89- Monitor Pass. There, Boris, a friend and section hiker we had previously met picked us up. He drove all the way from Placerville to get us - such a great guy!

Stopped at the PO in Strawberry for Dunc and Barb's resupply packages then were settled in at his home by 3pm. Evenstar, who went home, took all her unused Halfmile maps and a bunch of other goodies and sent them to Dunc and Barb. Such kindness, Evenstar! I especially liked those peppermint malted milk balls you stuck in the goodie box!

Boris fixed us a huge lunch - Salmon, and home grown veges, and we tasted his homemade wine (quite good!). Their son, Anthony, had just returned from CalPoly SLO, a new grad in Civil Engineering. He will be working for a year then hopes to get into grad school at Berkley. They have a very nice home in the country, with 10 acres.

Then his wife, Caren returned home from work. She fixed us a late dinner - Steak, potato salad, beets, salad, pasta, bread and two types of decadent desserts. Boris knows hiker hunger and these two people went all out for us. Dunc again demonstrated his great abilities to outperform all of us in food consumption skills.

I weighed myself. 146 pounds. That is the least weight I have been since I can remember. I think it is less than when Barb and I returned from Nepal. The Sierras exacted a toll on my body. Burning many more calories than I consumed during those two weeks. I need to learn from Duncan, the master.

My pack, on the other hand, came in at 32 pounds and that included four days of food (9 pounds) and a liter of water (2.2 pounds). This, with my new tent (fly creek UL1) makes me pretty happy. Is 20 pound base weight good?

We will be back on the trail tomorrow morning. Thank you so much, Boris and Caren, and best fortune to Anthony on his endeavor to get into Berkley for postgrad work.

I am flipping from mile 904 to roughly 1,094, about 200 miles. If I make it to Canada, I will surely return here and check off this section.