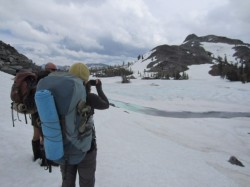 Now, it is me, travelling with the Kiwis. We were discouraged at Mammoth from all the snow. Perhaps if we moved a bit North to an area of lower elevation, life would be better. The Kiwis wanted to go to Echo Lake and test the trail North from there. I briefly thought of going on from Mammoth but frankly, I was hammered from the previous two weeks of "winter mountaineering" in the Spring. Plus, I would be breaking one of my cardinal rules. Don't travel alone in the snowy mountains.

So, Echo Lake it was. I had a food drop in Mammoth that would last for four days. Add another day from the store and we should be able to crank out some 20's right? And reach Sierra City in five days.

With the help of Overdrive in Placerville, we were able to get recharged and on the trail by 9:30. It was the first real day of hiking for the Kiwis in the last 10 days or so but they lit out strong.

We were lulled into a false sense of optimism as the trai all the way around Echo Lake was clear and fast! Wooo-Hooo, we were on the PCT, and it was dirt!
Well, that didn't last long and before we knew it, it was in the snow, in the trees, on the whoop-de-doos and our speed dropped to 1.5 mph.

Gotta say, it was pretty, all the frozen lakes and scenery in the Desolation Wilderness.
Desolation Wilderness, now that is a name and it was desolate. Not a soul around. They say it is one of the most popular roadless areas of trail in California but in three days, we would meet no one. It is called Desolation Wilderness because of the lack of trees caused by glacial scouring some 13,000 years ago. It is a very pretty area and I bet it is even more beautiful once the snow melts. We saw more signs of avalanches where avalanches would normally not occur.

On the first day out, I was ahead, going at pancake speed on the dry trail, singing 500 miles to myself. It was the first day without the Boo. I was ok. I said to myself, I can make it to Canada if the trail holds up. The health'Ometer was back up. The high ankle sprain was healing well and the strained quad and hip flexor had gone away. I do have this bothersome cracked lip from the sun. Sometimes I wake up at night and my lips are fused together. Sorry, if I am grossing anyone out but that is what it is. (You can unfuse them with your tongue).I use lip balm as often as I can but it doesn't seem to do much. We went by Aloha, Heather and Susie Lake, all frozen over, not enough to walk on but at times we would short cut the trail by hopping over some thick snow/ice areas on the lakes. Rule 5 is out the door. Rule 5B, "On a snow covered PCT, you can shorcut the trail as much as you like". That means, among other things, straight shots up hills, shortcutting all the switchbacks. There are still a lot of working snow bridges as well over some of the streams and rivers.

The snow will really wear you out. You carry as much food as you can, somewhere around 4,000 calories per day and yet to do miles, you must start at 6am and hike for 12 hours and hope to get in 15 miles. Lucky if you can get 18. You exert yourself more and you burn more calories, perhaps as much as 6,000 per day. Your body starts looking for stores of fat and then muscle and starts processing it for energy. My swimming / surfing pec muscles have all but disappeared. My body looks pretty scrawny, not as bad as a prisoner of war camp escapee but if this snow thing goes on, who knows?

Unless your name is Malto or you know how to dance over the snow at 2.5 mph or better, it seems impossible to continue to hike through snow for any period of time and still have enough "window" to make it to Canada. Already, even with the jump, we are losing ground. We did 12 miles today. From 1094 to 1106. We saw the storm coming and found a suitable camping spot not far from Dick's pass. The storm hit at about 7pm. Rain, hail, thunder, lightning and lots of wind. At one time, we had a flash then the clap, two seconds later. That would be less than 1/2 mile away. But we were well below high ground and safe. My one man 3-season tent did an admirable job of keeping me dry and warm.