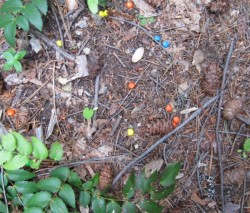 MnMs bursting out all over

We can do this. Only 21 miles to Seiad Valley and the trail is not only mostly clear of snow but it is downhill.

Boo Boo would be there so, as expected, I was ahead of the Kiwis, cranking on the downhill.

And since I had packed for four days and we would be doing it in three, I had extra food that I could eat. I was well fueled. At one point, I opened a bag of dark chocolate M&Ms. I took a couple. A few moments later, I went to take a couple more and the bag had only one M in it. HUH? Whats up? I looked at the bag. A hole had burst open in the bottom and all my M's were gone.

Like any dedicated thru hiker, I turned around and trudged uphill, looking for the lost M's. About 20 yards up the trail, there they were, mostly together. I spent about 3 minutes picking them all up. I searched around, making sure I had picked up every one. They tasted a bit like dirt or forest but still had all the nutritional (?) value. Ok, the calories.

Seiad Valley (pronounced Sy-Add) is a very tiny place. There is really only one building, consisting of the Post Office, the Market and the Restaurant (breakfast and lunch only). It is at the restaurant where you can take on the pancake challenge. You pay something like $ 13 and get quantity 5, dinner plate size pancakes, each weighing one pound. If you can eat the entire 5 pounds of pancakes in 2 hours, you get them for free. Wow, yippie! Something I want to do. Stuff my gut, not eat them all, pay $ 13, get sick, roll around in the tent all day just to say I took on the pancake challenge. NOT

I talked to the waitress there. She has worked there for two years and said she has seen about 200 people take on the P.C. She said she knew of only one who completed it. People, buy a lottery ticket instead! Your odds are better. I think a total of 19 have stuffed them all down. One woman was a bite away when she ran out of time. Oh well, you can try again tomorrow.

Some government entity (Klamath - Siskiyou, K.S for short) is trying to turn the area from a National Forest into a National Monument. The locals in Seiad Valley are vehemently against it. You will see "No Monument" signs everywhere. We asked some of the locals about it. Most of the people we asked said they didn't know enough to explain it but they knew they were against it. Finally we found a couple of folks who could tell us what it was all about. Apparently, as a monument, certain rights and freedoms are curtailed, more so than if the area is simply a National Forest.

Incidently, this is the state of Jefferson. The people up here do not want to belong to the state of California but rather form their own state, called Jefferson. They just feel that the lifestyle etc is so different up here that they can't relate to the typical San Francisco, Los Angeles types. Oh, and I think the number one source of income for this area is a cash crop called pot. Much of it is grown legally but there are a lot of illegal grow operations as well. You will see many "Keep Out", and "No Tresspassing" signs about. Heed them.

The RV Park is next to the Post Office. Pretty hiker friendly. The one spot we were in had a small refirgerator, electricity, a light, a TV/DVD player, a shelter if it rained and some chairs. It was pretty upscale from what we were used to. There is a laundry and pay showers too. Camping was ten bucks per person per night.

The trail today pretty much followed Grider Creek. It was a beautiful area. Barb and Julianne had hiked in about 4 miles to meet us. When we hiked out to the car, we found the cooler with more cold beers. And, rumor has it that we will be celebrating Duncan's birthday this evening as we won't be together on the 22nd.

Getting pretty spoiled on this PCT hike!