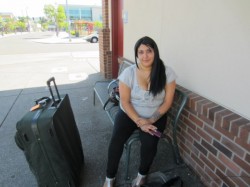 The Days of Purple Haze Are No More

The days of Purple Haze, of Iron Butterfly, of Jefferson Airplane are no more. For you youngsters thinking "Wow, he has gone off the deep end", I am talking about the late 60's and early 70's when I last was a serious hitchhiker. In those days, you would see a VW bus at almost every turn. The hitchers and the drivers were a gentle bunch, usually wearing madras shirts, beads and smelled of patchouli. You could hitch from pretty much anywhere in America to anywhere else (OK, except the South).

I know hitching is harder now but I am overly optimistic. Yesterday, I got a ride from Nick right away. Most people in Ashland (a University town) say hitching is common and relatively easy. So, I had to get to Medford this morning by 6;15 AM for the bus to Sacramento. If I was on the street at 5:30, I should be able to get a ride for the 11 freeway miles (It gets light at 5:30, I alloted 30 minutes of hitching and 15 for the trip). Didn't work out that way. It was 7 am when I finally got a ride to Medford. Ok, there will be another bus. I hike 2 miles through town to the bus station.

At the station is one other person, Michelle, sobbing. She is 21, came up all the way from Big Bear to see her boyfriend. Boyfriend doesn't show up to pick her up. Boyfriend's phone goes to voice-mail. She calls her mother (a bunch of times) and sobs some more. She is looking for a liquor store, I give her some Tequila. She is somewhat composed now. It is 9 AM. Do I want to drink with her? No Thank You but keep the small bottle I have. She is worried that her boyfriend has dumped her. I tell her that well, maybe his car broke down. She starts sobbing some more. She has led a very sheltered life and this is her first really big trip. She doesn't know what to do. I google his address, it is 5 miles away. We talk to a cab driver. The fare is 15 bucks. I tell her, 1) She can get on the next bus home or 2) She can jump in the cab and go see what is happening. I should have given her my email address - I am now curious as to what happened. I wish her luck and start walking the 2 miles back to the freeway on ramp. There is a 2pm bus. I will try my luck hitching from 10-12 noon. A guy picks me up right away near the bus station and will take me to the on ramp. When I jump out, he starts to immediately drive away, with my pack in the back seat! I'm half in and half out of his back door screaming "Wait, Wait!" He stops and apologizes. He forgot my pack was in the back.

It was a good ramp, with oncoming traffic from both directions. I ran my stopwatch for 10 minutes and counted cars. About 50. This is good. I have a sign that says "Sacramento". Whenever I need a long hitch, I always use a sign. Perhaps someone will be going to Sacramento. I added "Will Help with Gas Money" underneath. That should increase my chances. Today I didn't want a short hitch for fear of being stuck out in the middle of nowhere. Time passed, about 600 cars passed. Most of the people didn't even look at me. Perhaps I was invisible in Oregon?

I walked back to the bus station. Michelle was gone. Good, she picked option #2. At least she will know what is up. The 2 pm bus came as scheduled and had very few people. It was an enjoyable ride south on the I-5, looking over the terrain I had just covered in the last week. Mt Shasta was stunning. I had cell coverage most of the way and was able to upload pictures and journal copy. At 9:30 PM, we pull in to the Sacramento terminal. Have to say, it is in a pretty seedy downtown area. The Reno connecting bus leaves at 3:30 AM. I talk to the ticket lady. Can I sleep on the floor here? "Sure, she says, "We are open 24 hours". I find the perfect spot to Cowboy Camp. It is in a dead end area of the terminal, next to an ATM machine. I plug in my phone charger in the extra receptacle and set the alarm for 3 AM. I am thinking about lighting up my alcohol stove and cooking dinner but decide that may be pushing the envelope a bit too far. I am dead asleep by 10:30.

3:25 AM (July 24), I am the second to the last person to board the bus. All the seats have at least one person and a few have two. There are no double empty seats but one woman had all her excess luggage piled up on two seats (they charge for excess on greyhound as well). I asked her to move it all as I was planning on sitting there. She did without complaint. Then the last person to board came on. You know how everyone sits in the aisle seat to guard their inside seat? Well, I didn't - he sat next to me. That was just fine as I was pretty rested from the cowboy camp and still had images to reduce and upload.

6:10 AM (July 24) We arrive in Reno. I talk to some kid in a pickup truck - trying to Yogi a ride. "How do I get to the 395, going south to Mammoth?" I knew it was a ways away. I would have to walk about a mile to the I-80 on ramp then, miles away, it would feed into the 395. He gave me good directions but didn't offer even a lift to the on ramp. I ate some breakfast thingy at Jack In the Box then went to scope out the on ramp. It was a hitcher's nightmare. The ramp was under construction and had those big orange barrels blocking any area for a car to pull over. This wouldn't work. Alternative plan B, I looked up the road. There was an island where the cars would have to stop at a light before entering the freeway. I would stand on the island, now, with a sign that said "Mammoth" and on the backside, "Or, 395 S".

It wasn't looking good. Guess I was invisible in Nevada too. One guy pulls up, rolls down his window and says "Bro, here's some change for you" He thought I was panhandling. "Dude, I need a ride, not spare change." He was a very nice person but couldn't help with the ride. Finally one guy rolls down his window and says he wasn't going far. I said "Any place on 395 will be better than this ramp" He said "get in" and drove me to a much better ramp. There were food stops at this exit. It was not under construction and had a huge pull over area on the approach. I was timing cars again and holding up my Mammoth sign. Good flow. 50 cars in 10 minutes. Then an SUV pulls over. A guy named Frank, heading for Bishop. He saw the Mammoth sign and decided to stop. So I get a three hour hitch right to the Mammoth turnoff. And, turns out that Frank and I had a lot in common. He was a rock climber (did many big walls in Yosemite) and is now a computer techie guy. I had a very enjoyable time socializing with Frank. We stopped at Whoa Nelli's Deli on the Tioga Pass Road and had Fish Tacos - Highly recommended! The hitch up the hill to Mammoth was easy.

So tonight I am at our Mammoth friend's home (Pat, Crystal, Bobby and Diane). Hoping to get back on the trail tomorrow.

Here are a few tips for you neophyte hitchers:.

Hitching with a ride bride is best. Solo is next. Three or more hitchers together is difficult.

If you are a guy with a girl, the guy always gets in first. If there are two of you, one person gets in and the other loads the packs into the vehicle. Getting out is the reverse order. One gets out, get the gear, second person gets out .

Whoever gets to the hitch spot is first. Others must hitch downstream from them.

Look sharp. Tuck in your shirt, don't wear sunglasses or a hat if you can help it. Make your luggage look small but don't hide it. Don't hide other people in the bushes unless they will stay hidden as you get picked up.

Clean shaven hitchers have a better chance than scruffy ones

Don't sit, always stand. Face traffic. Smile, look each driver in the eye. Pick a ramp with lots of traffic. Pick a place where the driver can see you up the road (don't hitch on a turn). Pick a place where they can easily pull over without endangering you or others. Hitching at night is near impossible. A sign that has "PCT Hiker" might help.

Use a sign for long hauls. Don't use a sign if you just want a ride up the road in increments. Our friend Curtis recommends signs that list a spot much further than where you are going. Example: For a hitch from San Diego to Tucson, he would have a sign that said "New York". We don't know how well this works but he swears by it.

Ramps with gas stations will have more traffic. You can always go to the gas station and try to strike up a conversation. You might have luck at a truck stop as well.

Don't expect to get a ride right away every time. It is like fishing. The longer you have the bait in the water, the more chance of catching a fish.

If you don't have good vibes about a ride, don't take it. You can always just say no. Just because someone stops for you doesn't mean you are obligated to take the ride.