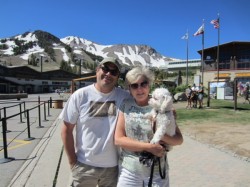 It was one month ago, almost to the day, that we left the Sierras. We exited via Mammoth pass at PCT mile 903.

Today, I would continue on from 903. I figured there were two ways to get there.

1. I could get a ride up to Horseshoe Lake, take my full pack and trudge up and over the pass to get to the PCT or,

2. I could take the turon bus from the main ski lodge (seven bucks) to Red's Meadows, which is PCT mile 906. At Red's, I would check my pack at the store and, with one bottle of water, do a run walk South, up the hill to 903, then, turn around and jog back down.

If it were your choice, which would you choose? Kind of a no brainer huh, unless you don't want to spend the seven bucks.

There was a big trail maintenance crew there today doing wonders. One team was rerouting the trail around a big muddy section. Another was unearthing a big boulder, right in the centerof the trail. The crews were PCTA member volunteers and students from Santa Rosa JC. The students were getting credit for a trail maintenance class. Thanks to all! (but don't forget my request for the Cajon Summit reroute)

By 1 pm, I was back at Red's, sitting in the restaurant with two JMT hikers, Thomas and Deo. I ordered the lunch special, hot pastrami on sour dough.

I was back on the trail by 2 but, since I have never seen the top of Devil's Postpile, I took a side trip. Pretty cool, hexagonal rocks everywhere.

Agnew Meadows, MosquitO'meter 8. I met two trail angels who call themselves Team Turtle. This is the same TT that maintained the cache way back at Silverwood Lake (May 13 entry). They offered a bunch of food - I was heavy so only took a pear and an orange. Gracias Compadres!

This stretch of the Sierras is my home turf. We ski here in the winter and I climbed Banner Peak two years ago. Today, it is dusty and there aren't a lot of campsites but Halfmile had a good one for me at mile 920, and no ant hills.