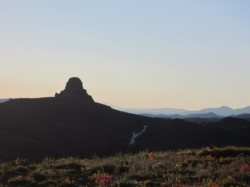 I could do this. This morning I checked the altitude profile. It was something like 3,000 up and a lot down. In fact, the last part was seemingly all downhill but I did have to go over a pass. I should be able to do 25 today and make it to Echo Lake Resort.

I got another early start. About six miles along my way I met Mike and Pete. These guys are backpackers. Seemed like Mike has been everywhere. He had some back problems so was limiting his hiking to day hiking. How the heck did they get way in here I wondered. I could had chatted with these guys for hours but after about 30 minutes, I had to move on. Echo Lake, remember?

I hit the highway again. Carson Pass, Highway 88. There was a visitors center, staffed by volunteers. They heard I was a thru hiker and started offering me stuff. Wow, trail magic again! I filled up my water bottle, dumped my garbage and took a cold nectarine. Thank you!

You know I have one page devoted to people along the way that helped me (and helped us). When I return from this trip, I will try to update that page with as many names as I can remember or find on these pages. You will see, it will be one very long page! It just amazes me.

More people. Two ladies with very nice cameras, out taking pictures. Terrance, a section hiker, loaded with two weeks worth of food. Then a group led by an elderly 75 year old man named Jeff. The trail started heading up hill. I looked back, and there was Jeff, right on my tail. I kicked it back a notch and we chatted as we went up the hill. Looking back I couldn't see the rest of his group. At the top, we shook hands, took pictures and I was off. Echo Lake, remember?

Later in the day, there were the three young section hikers. Not so friendly. Maybe because they were 20 something and I, old enough to be their grandfather. Somehow, they got off trail and I was in front, going uphill. Ok, I am a bit competitive so I upped it to 80% pancake. These guys were fast but not pancake fast. We played tag throughout the day. I tried to make friendly conversation but it seemed awkward. Oh well.

Just as I reached highway 50, about 1.5 miles from Echo Lake, I ran into Marmot and Roo. What a suprise! I knew they were in the area and yet, didn't expect our paths to intersect. I met them on July 12, up in Northern Ca. They were going south, the Kiwis and I north. We exchanged data. Again, we had a lot to talk about. Must have hung there on the trail for 30 minutes. How was the trail ahead of me? And this is what you have in store for you as you head down to Kearsarge Pass (that is their flip point). Kerrick Creek was the only point I thought that might be challenging. They had some snow up above Sierra City I should watch out for. Guys, hope to see you again. As outpost says "The trail is long, but it isn't very wide".

I reached Echo lake resort at about 6:30. The guys were sitting on the tailgate of their truck drinking beers from their cooler. We exchanged greetings but no beers. Heck, I would have given them a beer or two. Well, maybe they only had three beers in the ice chest.

I got to the store at 6:30. It was closing. See, I never even considered that the store would be closed when I got there. But it almost was. And the post office has really weird hours, like 11-2 or something like that.

I said to the girl there "I was told that if I was very friendly and nice, someone here might look in the post office for my resupply box or at least see if it is there."

She smiled and asked for photo ID. YES! The other girl was cleaning up the snack bar area. I spotted a sign that said "Milk Shakes".

"Is there any chance of getting a milk shake?" I asked.

Five minutes later, I had my resupply box and was sipping one of the most delicious milk shakes I had ever had.

Barb sent wayyyy too much food. She forgot that the Kiwis and I already did Echo Lake to Alpine Meadows, two full days of hiking in the snow. Desolation Wilderness - remember the snow storm at Dick's Pass? Yep, that was the time, about a month ago. We used the Mammoth to Tuolumne food for Echo, and now, I have five days worth of food for three days worth of hiking.

No prob, will just stuff it in my pack and take it all with me to South Lake Tahoe.

I'm feeling lucky. Mother PCT failed to unload on me yet today and I was officially off the trail as I walked up the road with my sign that said "South Lake Tahoe".

Right off the bat, I got a ride for a good part of the way. S Lake was only 5 miles away now. I could even walk it if I had to. Boom, another quick ride. A 25 year old kid named Colton. Such a nice young man. He was headed for the casino area and took a slower route and dropped me off right at the Motel 6. Karma!

Two beers, big salad bar and a burger with a ton of fries. Does life get any better than this?