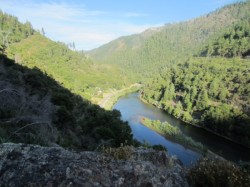 What a nice afternoon for a hike up the hill

Fright Night on the PCT

It all started out fine. I was trucking up the big hill at 5:30 pm, in the cool late afternoon. I climbed higher and it got darker. Now I was in a grove of trees, big trees and even though it was still light out, it was much darker in the trees.

I would have the moon to help guide me, I thought. But the tree cover became thicker and it got even darker. I realized early on that I would be using my headlamp for the rest of the night.

There was something that Bill Price of the Red Moose in Sierra City said to me just before I left there. "Watch out for mountain lions. We had one right here in town just recently". OK, Bill's words kept spinning around in my head. Mountain lions, hungry mountain lions, hunting at night. Single, helpless hiker, in the darkness, didn't stand a chance as the big cat stalked his prey. I then recalled a true story about a friend of a friend who was attacked by a mountain lion. He was riding his mountain bike and used the bike for defense. He survived with only a few cuts. I looked around for a mountain bike to take up the hill with me. I would just have to use my hiking poles, or maybe my swiss army knife.

There was a full moon but I rarely saw it. When I did, it was only briefly and lit up the forest like a car headlight. At 9 pm, it was pitch black. I only had my meager headlamp to help find the way. I could hear a river. It was a loud river, much like a Sierra river. I knew I would have to cross it. Turned out it wasn't all that bad. I was hoping for a bridge but there was a series of logs that required one to tip toe over in the darkness. I could easily get off balance when the light moves around, especially when you must stay on the logs. The first log I stepped on was loose, and it moved. I almost went in but really, in daylight, this crossing would be no big deal. All the noise was coming from a waterfall just downstream. This was at mile 1296. I had gone six miles by 9 pm. So far, it had taken me three and a half hours to go six miles - No bueno.

I forgot to tell you about the downed trees. They were everywhere and each obstacle required close inspection to determine which way to cross. Would I go right, left or over? I could not believe the amount of debris on the trail. Perhaps some of the most obstacle covered trail on the entire PCT, and I was doing it at night. One in particular was a "Go Through". It was a bunch of branches and you could work your way through them but it burned more time.

A moth drawn to the light of my headlamp whaps me in the face. It startles me but I quickly realized it was only a moth. Then the spider webs, wrapping around my face. I had forgotten that spiders build webs at night. I felt a bit sad for the spider. He won'tbe getting dinner tonight.

As I proceed through the forest, by the dim light of my lamp, pieces of downed tree look like alien beasts, ready to jump out and devour me. One in particular was large enough to swallow me in one bite. Don't be a scardy cat, Jack. Did someone say "cat"? I come across a black object on the trail. It looks like mountain lion poop to me. I strike it with my pole. It is a black rock. It was just a rock.

River crossings at night are difficult. Unlike the opposite side, there were many on this stretch. Many. And each one required scouting. I discovered that I could take a flash picture of the crossing then zoom in on the picture to study the particulars of the crossing. Some were boulder hops, others combos of logs and boulders. I know, I could just have jumped in and tromped through the shallow water but really, I wanted to keep my feet dry.

One crossing looked like I would get wet feet on the last hop so I scouted downstream and found a single jump spot. It was a big jump and I hesitated a bit before making the leap. It was successful. (mile 1298)

10 pm Then there was the cat. I was pretty sure there was no cat stalking me but every now and then, I would quickly spin around and shine my light into the darkness. I was looking for the iridescent, beady, bright yellow eyes of the cat, somewhere out there. You know that adrenaline rush one gets when they are scared? I could feel the adrenaline coursing through my body on numerous occasions. You especially feel it on the back of your neck. The more I thought about it, the more scared I got. Don't think about it you scardy cat! Dang, there's that cat word again!

More downed trees. Was I in a Thriller movie and being observed by Michael Jackson's Zombie friends? I tried not to think about it.

Our friends, Frank and Carol have a Halloween party every year. To get to the party, you must go through the garage. It is all set up with black plastic curtains, creating a maze. There are black lights, smoke generators, skulls and real people, dressed as zombies who jump from between the curtain and try to grab you. It can be a frightening experience. Last year, I was one of the zombies, sitting idle on a chair. People thought I was a life-like dummy, until I screamed at them and lunged forward. It's ok being on the "scarer" side and can be, well, scarey being the victim. Frank and Carol should have all the attendees go through this forest on the way to the party. You won't need any black lights or zombies. They are already here.

More downed trees. Have to climb over another downed tree. Oh, looks like a giant egg. Dinosaur egg? No, it is just a rock. Now the trail has improved quite a bit. The cobbles have gone away for awhile and I am on clear trail. Unlike the trail on the other side, this is not just switchbacks. You go up, you traverse flat, you work around a canyon, sometimes you go down and cross a river, and then you climb again.

Moonbeams are coming through again. I was able to move more quickly.

I stopped to pee. Off to my left was a face, buried in the soil, staring up at me. Really folks, a face, I kid you not. I wasn't hallucinating either. It looked like a cross between Bart Simpson and Grocho Marx.

If I stop too long to ponder a tree or river crossing, the mossies move in. Don't they ever sleep? At least it is a cool evening. Boy am I glad I didn't tackle this in the heat of the day! (on second thought, I'll take the heat of the day anytime!). I navigate another tree crossing. I get tree sap on my hand. It is sticky and it stinks.

I see rock cairns that don't need to be here. Then I remember the snow and how useful these little piles of rock were. Over here, off to my right is a small statuette. Looks like Don Quixote or an alien beast. You decide.

The third big river crossing was a small log that you carefully walked out on. Then you move to a much bigger log and work that one for a ways. Finally, there was a narrow channel of river that you could lower yourself across from the second log. There was a tree on the opposite shore to help you make the move.

By 2 am, I am whipped. I had done 12 miles. I found a spot on the trail, a nice flat spot actually to pitch the tent. I would be asleep soon and the shadows in the forest would become a memory. I would sleep in tomorrow, oh, I mean today.