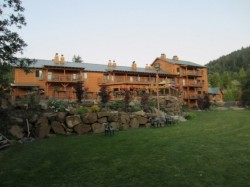 View from the *Campground*

August 17th, I woke up in Redding, CA. I had a bus to catch to Medford, then another to Ashland. The connection worked well except on the Medford to Ashland bus, I dropped a micro flash card on the bus floor and it took me 15 minutes to find it (it fell in the bag of donuts I had sitting near my feet). An older woman sitting on a seat near me felt so bad, she started pointing out things on the floor for me. "No ma'am, that is not it, that is a piece of gum". I really was appreciative of her concern. I thought I would have to stay on the bus until I found the chip. Fortunately I found it before my stop at the Ashland Hostel.

The Hostel was booked full. My alternate plan was to go to Callahan's, some 10 miles south from Ashland and right on the PCT. I yogi'd one ride to the freeway on ramp and quickly got another to the exit at Callahan's (Thank you Ross for the lift).

Callahan's is a very hiker friendly place. Read VERY friendly. They have a $ 40 hiker special. You get a towel, soap, shampoo, a shower, free laundry, a free beer (more on this in a sec), a dinner that consists of a salad, bread and all the spaghetti you can eat with a very delicious meat sauce. Then, you get to camp on the lawn, use their restrooms and then, the next morning, get a wonderful breakfast of two eggs, bacon, potatoes and all the pancakes you can eat. Makes you want to stay here for a week. Ron and Donna, the owners are wonderful friendly people.

Oh, the beer. You can choose from a variety of beers. If you choose a Bud-Light, dude, you do not belong in the world of Beerdom. Instead, choose the Ashland Ale. It is a local microbrew and very tasty - and it is just as cheap as the Bud. It's free man, why drink colored, fizzy, water?

I was working on a journal entry and didn't leave Callahan's until after noon. Ron gave me a lift and saved me from road walking about 2 miles. I was on the trail by 1 pm.

Oregon is much different than California. The trail is smooth and fast. There are no quad-killing climbs and it seems to be much better signed. "No more dislocations," I thought to myself.

I woke up at a weird place. Right next to a cattle gate and not very far from a highway with loud trucks. I was at mile 1744, Highway 66 I believe (Green Springs Summit). I got away early, 6 am. Now, I had to make some very long range hiking plans. Barb was coming up to hike with me and the plan was to meet me at Big Lake Youth Camp (mile 2001, on August 27th). Nine days away. I was at mile 1744. Well, let's see, 2001-1744 = 257. Divide that by 9 you get 28 mpd average. Wow, can I even do this? I should have inserted another day in there but I told her the soonest I could possibly reach BLYC was the 27th and she used that as her arrival date. So, the push was on.

I have run a few marathons and if you run marathons, you know about banking time. If you want to run a 4 hour marathon, and you are at the halfway point at say, 1 hour and 57 minutes, then you have banked three minutes. If you can run even faster than your four hour pace, then you can bank more. When you get to mile 22 or somewhere near the end, you may really need these extra minutes. If not, well, you set a PR and that is good.

So I would try to bank miles. Today the 19th, I reached mile 1758 by noon. 14 by 12 is good in my book. It was a hot day and there was very little water on the trail. This meant I would have to carry extra water. At 2.2 pounds per liter, this also meant a heavy pack. I found a weird faucet springs and took two liters. At mile 1762 it appeared that there would be no on trail water for nineteen miles so I loaded up with 4 liters and drank a half just to camel up.

I would be dry camping - this means camping where there is no water. I would use the water from 1762 for dinner and to get me to the water the following day.

Late that day as I was looking for a place to camp, I ended out in a huge volcanic area. There was volcanic rock on both sides of the trail. No place to camp. I went until dark and finally gave up and set up camp on the trail - a spot that was both relatively wide and flat. I had gone 30 miles - Two in the bank!

At 9 pm, another thru hiker named Wet Smoke came busting through and almost through the front door of my tent. I apologized for camping on the trail and he said no problem as he skirted the tent by hopping on the rocks in the dark. I slept uneasy that night and had dreams that I was laying on the interstate somewhere near Oceanside and cars were zipping by me on both sides but I never got hit.