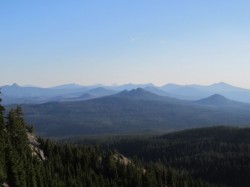 Someone broke into our house and messed with our stuff!

Today I would reach Mazama Village. It is the area where the campers hang out when they are touring the Crater Lake area. There is a restaurant, store, campground, laundry and they hold resupply boxes for hikers.

Again today, I wasn't paying attention to the water sources. I walked right past the last one. There would be no water for some 15 miles. Soon I realized that I missed it, dropped my pack and did a run/walk back to "Honeymoon Creek". Lost some time again, and again, I had a few words with myself.

I reached Mazama at about 4 pm. There is an all you can eat buffet there ($ 16). It is a good one too. Roast beef, ham, a killer vegetable lasagna, salads, ribs, potatoes, tons of different desserts. You get the idea. Along with some other thru's (Cricket and Mogley) we did a number on the buffet. Oh yeah, they had that soft swirly ice cream that comes from a machine. I had a couple of those.

The store is well stocked and they had my resupply box, but again, no maps were in the box.

Everything closes at 9. I managed to do the laundry but missed the shower so I washed my filthy feet off in the sink at the campground. I was hoping that no one would come in while I was doing this but two guys passed through. And, nope, they didn't even think about washing their hands before exiting.

A kind hiker lady, trail name Shepard, reserved campsite B9 for all us thru hikers so it was free camping. There were about 8 tents there this evening.

I would get a shower at 7 am tomorrow and be sparkling clean when I hit the trail.

With room on this page, let me say something about my resupply boxes and halfmile's maps. Long, long ago, we ordered a set of Halfmile's maps for the entire PCT. It is a ream of paper, printed on both sided. We broke down the maps into sections, bagged them, added the corresponding Yogi guide book pages and put the map bag into it's respective resupply box. It was working well until we exited at Mammoth. With the flip, it set all the boxes in disarray. The Tuolumne Meadows box had already been sent. It would be recalled and then resent a month later. Other boxes would sit and wait while boxes for places like Echo Lake, Castella, and Etna would now take front stage.

Each box must be restocked for one person rather than two. Barb is doing an excellent job restocking them and getting them out in a timely manner. But, we have a problem.

Somewhere along the line, one of the boxes was cannibalized for a new drop point. Once that was done, that box no longer was available so when it was time to ship it, another box had to be cannibalized. You can see what can happen here. Things that are supposed to be in one box are no longer there. Maps covering one area might have ended out in a different box. The box I picked up here at Crater Lake used to say "Ashland to Crater Lake" but that was "X'ed" out and it now says "Crater Lake to Shelter Cove".

For a long time now, I have been without any paper maps. solely relying on George to point the way. George, unfortunately, doesn't show the big picture but is really only good to let you know that you are either on or off the trail and he provides waypoints which is helpful.

Sometimes even when I have the corresponding paper maps, I am too tired to check them out the night before and as you probably read get lost, er, dislocated. But, I really miss the paper maps and especially miss the altitude profiles. The altitude profiles will tell you what the day will be like. They show some water resources and campgrounds as well. And, you can add up the vertical at the end of the day.

I didn't get maps for the Crater Lake area but in the box were maps for the next section. I'm to a point now where everything "is what it is". If you can't do anything about it, then let it pass.

Barb did look all around the place, searching for the maps. They seemed to have disappeared.

We have a saying for this when it happens. No finger pointing. We just say "Someone must have broken into our house and messed with our stuff."

Now, it looks like they took some maps out of some of the resupply boxes.

Almost forgot. Last night, I had a fly infestation in my tiny tent. I don't know if they all just flew in when the door was open or if they hatched when the tent was opened up. I think it was the latter. Apparently momma fly laid some eggs in the mesh and out popped all the kids. It was a pain trying to shoo them out the door. Some died. Sorry guys.