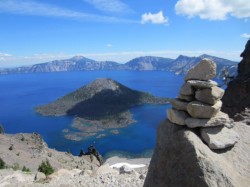 To get from the PCT to Mazama Village, you have to do a road walk. It is somewhat dangerous as there is very little shoulder, the road curves and the traffic goes by quickly. Forget hitching on this 1.5 mile stretch. It would be too dangerous for a car to even stop. I did the road walk in yesterday but found out today that there is a shortcut from the campground to the PCT.

Again, I was up early. I was at the shower at 7 am when they opened the door. You get 4 minutes for 75 cents. Since my feet were already clean, I managed just fine on a 4 minute shower.

They had a buffet at the restaurant. I knew it would drag on for maybe an hour so I bought a box of donuts and a coffee at the store. This would be Crater Lake day and I wanted as much extra time as possible. Those donuts were so good. I ate half the box (the mixture: plain, crumb, powdered sugar and cinnamon). I saved the rest for lunch.

If you choose to do the shortcut, here is how to go. From the B-loop in the campground, follow the trail that runs along the edge of the drop off. It is right on the edge. Do not take any trails that go down. You will soon cross a road and see a sign that says "Annie Springs trail". Take it. Don't go down to the waterfall, on the right, unless you need water, keep left and climb up the hill. It is a steep climb but not too long. In about one half mile, you will reach the PCT. The whole thing took me 27 minutes. it intersects at mile 1830.

I knew there was the real PCT, also called the Equestrian Trail and then there was the Alternate route that goes up to Crater Rim village and runs along the rim of the lake. Everyone takes the alternate here, unless you just have to stay on the PCT. The junction for the rim trail is perpendicular to the PCT. I was distracted by some campers on the left (trail on the right). Yes, there is a big sign there but I didn't see it. Main PCT trail goes straight ahead and is a big trail. Alternate trail to the rim is smaller. What is it with me? I went straight for about a mile. Ok, no words this time, I could easily see how it all happened. As I was returning to the junction, I met another PCT hiker who missed it as well. Turned him around. Lost about an hour and two miles (but they were PCT miles that very few people walk on!). You guys must be thinking I'm a real dweeb getting dislocated so often. I am not going to let it happen again. ('cause, yeah, I'm even beginning to think it). If it happens again, I'll let you know, as I beat myself silly.

Unless it is not in your PCT rule book, do take the Crater Lake route. It is fantastic. There is a store and snack bar up there too and restrooms and trash cans. Load up on water here as it will be dry from here on. I would have been so bummed if I stayed on the (Equestrian) PCT and popped out well after the Lake.

A very good friend of mine Jesse is losing his mother to cancer. I am in a sad mood today thinking about it all. His mom is a wonderful person and Jesse is like family to Barb and I. Jes is one of the many friends we have maintained connections with for the last 40 years. He was on the three day Mexico trip in 1971 when I became an un-engineer. He asked that I build a small cairn over some beautiful lake for her. Well, I can't think of a more beautiful lake than Crater Lake. So today, I built two small monuments. One is very hidden and way out on a sheer drop precipice. It cannot be seen from the trail. The other is right next to one of the main visitor pull outs.

Barb and I are thinking of you Jes. Memories of your mom are here at Crater Lake.

I did only 23.5 miles today but it was ok. I spent a lot of down time and took a lot of pictures, mostly of the lake. It was a nice day for a hike around the rim of Crater Lake.