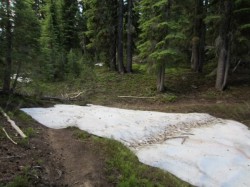 Confessions of a Skipper

Am I a "skipper"? I think it is common knowledge that a real "skipper" is someone who misses a BIG section of trail, like the entire Sierra section. So, I don't see myself as a skipper even though I may have missed a few small pieces of trail. Read on.

The way I see it, every time I sat in the snow and glisadded down a hill, I was skipping. Just think of all the switchbacks I cut. And, if you really want to be technical, whenever I even walked on snow, I was not on the PCT. I might have been above it but most likely not. But, I am hiking the entire distance (or more) and attempting to stay on the trail as much as possible.

I have had little skips. I recall when Barb and I were picked up by Dan at Tehachapi. We were walking on the road toward the freeway. A couple of days later, Dan and Rockin asked us if we wanted to be dumped back on the road, exactly where we were picked up or should they drive us further up the road and over the freeway, where the (dirt) trail resumes. We didn't think long on that one, skipped a half mile of pavement.

At Mammoth there was a three mile section that I could have skipped (mile 903 to 906, Mammoth pass to Red's Meadows). The bus took me to Red's but, long ago, we exited at 903. It would have been an easy skip but I didn't feel right about it. Instead, I slackpacked from Red's up to the pass and back down. Checked it off. Then, I could have taken the bus from Red's all the way up the hill to Agnew meadows but I didn't. I even took a side trip en-route to the top of Devil's Postpile.

When Barb came to visit in Northern California, on her last day, she drove us a mile up the road from the Seiad Valley RV Park to the trail head. The PCT runs up this road and if you have ever walked it, you know how dangerous it can be. There is very little shoulder and the cars and trucks are barreling right along. "Take us to the trail!"

In Oregon, I chose to go around Crater Lake rather than the Equestrian Trail, which is the real PCT. But everyone takes the Crater Lake route, it is so much more beautiful. Does that make it a skip? Some might say that the Crater Lake Rim trail is PCT, me included.

Then there is the Oregon Skyline Trail. When you get to Windigo Pass, you have a choice. On Halfmile's map it says that many hikers choose to take the OST. It is 10 miles shorter, you climb 1,000 less vertical feet, it is more scenic and there is more water on the trail. It goes directly to Shelter Cove Resort where my resupply box was. The PCT will require you to hike an extra 2 miles down to the resort. Halfmile even provides maps for this "alternate" route. For me, this was a no-brainer, I was on the OST. By taking it, I hiked 10 miles of OST and "skipped" 20 miles of PCT. I was in Shelter Cove Resort before I knew it, got my box, got some food, took a shower and was back on the trail (the real trail) before dark. All the other thru hiikers I talked to that day also were on the OST.

Counting all the times I have gotten lost, I might end out walking 3,000 miles - HA!

I think I am still following the rules but maybe I should specify what "mostly" means. How about 97 percent? Let's see, 3 percent of 2,650 equals about 80 miles. That should do it... 97 percent of the trail.

Yes, there were skips, there were flips but I consider myself still in the game. When it's all said and done, the only person you are cheating is yourself and I am still sleeping soundly at night!

Whoever coined the term "Hike Your Own Hike" should get the Nobel peace prize.