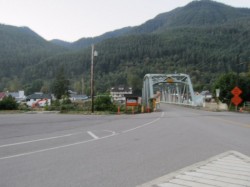 Leaving Skykomish early in the morning

Boo Boo here . . . Jack just left Skykomish and has been told that he will probably not have cell or internet connection until he returns to the US. If you'd like to follow his progress click on his last SPOT location. If you put your curser on the location (S) it will show you the time and date. His anticipated arrival in Manning Park is 9/27 or 28. Woo Hoo!

Update Tequila Jack just checked in, on a weak cell connection. He says "I am trying to move fast today to get to Stehekin on Saturday before the post office closes. I have a quirky song rolling around in my head. I don't know where it came from. But, it goes something like this 'I would walk 2,000 miles and I would walk 500 more. Just to be the man . . .'

I was packed up last night. I rolled out of bed at about 6:15 and was walking out the door of the Cascadia Inn at about 6:30. There is a gas station just across the bridge, by the highway. I bought some breakfast junk food, two muffins, a box of donuts, and a "Big Dude" sandwich for lunch.

I had a cardboard sign that read "Stevens Pass". As I stood out there by the highway, munching on donuts and holding up my sign, I realized that this would be my last hitch of the PCT journey. No hitching in Stehekin and I would be taking a bus from Manning Park. In the back of my mind, I was hoping this last hitch would be a quick one but, considering the way things work, I expected this last hitch to be a nightmare.

Traffic was very light, maybe a car every 3 or 4 minutes. The cars were flying by as well at about 60 mph. "Not looking good", I thought. But after about 20 minutes, a car whipped over to the shoulder. It was Judith, a retired physical therapist who is now enjoying hiking the local mountains. "Are you a PCT hiker?" she asked. "Yes, Maam, I am", I replied. "Well, then, get in" she said.

She was heading up toward Stevens Pass going on a loop hike herself. She went further than her trailhead to drop me off at the pass. I would see her again today as our paths on the trail would cross. I would call this a stellar last hitch!

It was 7:50 am (Tuesday) when I hit the trail. I had new shoes, new gaiters and was loaded with food. It was 100 tough miles to the next stop, Stehekin and there was a bus that would take me to town. It was possible I could work this segment hard and catch the 6 pm bus on Friday. That would make it a four day segment. If I missed that bus, it would have to be the 9 am bus on Saturday. I had a resupply box at the post office in Stehekin and they would be open on Saturday from 12-2 pm. Arriving after 2 pm on Saturday wasn't an option for me. To stay on my new schedule, I would shoot for mile 2,500 today.

By noon, I had done 9 miles - that was ok, a bit over 2 mph. But, I still had 15 miles to go. Let's see, 15 miles in the next 7 hours - ok, I can do this and be camped before dark. Around lunchtime I met Austin, a day hiker heading south. Nice guy, we stopped and had lunch. He was a wealth of local information.

At mile 2482, I saw from above a most beautiful sight. A lake with a big beach. Yes, you read it right, beach, sand! I can't remember seeing a sandy shore since we left our camp spot at Silverwood Lake (mile 325) - and, that seemed like a lifetime ago. How I missed the beach, I thought. If I wasn't so high above this lake (Vahallia), I would go down there and just sit for awhile, on the sand - well, if the beach was right by the trail, I might take a 10 minute break and walk around barefoot, but I was now on a new mission and I had to limit my breaks.

I dropped my pack, pulled out my "quartie" (empty quart container), backtracked up the trail, and started collecting small white rocks. When I had enough, I returned to a good spot for a mile marker. It was a flat section, just left of the trail. By the time I was finished, it was dark so I took a flash picture of it. "2500" - I had walked two thousand, five hundred miles - even with my feet screaming "Yeah, we know!" it was hard to believe.

It was about 8:30 pm by the time I had reached the camping area and set up my tent on a flat spot next to a log. Very nice spot with a piped spring about 20 yards away. As I was checking things out, I found, perched on the log a large heart shaped rock. Did someone know I was collecting them? It was a thick rock, almost like half a bowling ball and must have weighed 12 pounds. This is a real heart sized heart rock, I thought. Boo Boo would love it. But, I remembered the words from Chris at ULA - my pack just couldn't take the extra weight. I set it back down on the log.