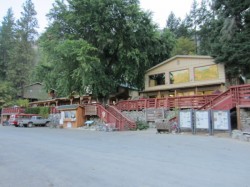 Oh, I could stay here another day but there seems to be some weather on the horizon and it would be prudent to get a move on.

After a wonderful evening last night, I was up early this morning to check off the town chores. First I hit the laundry. There is only one washer and dryer but when I got there, both were empty. I stayed with the clothes as more people came and got in line to use the machine. With the clothes all washed and dried, I went to the restaurant and had a wonderful breakfast. Eggs, sausage, toast, pancakes, hash browns, and coffee. Do you think I am eating too much?

The lady at the desk offered me a late check out of noon and the post office would be open then. I moved all my worldly possessions to the observation room. It is a very nice spot, just above the store. Secret Tip: Go up the outside stairs between the store and the restaurant (on the store side). Go through the door at the top and hang a right. Walk all the way to the end. I don't think the owners mind if you hang out there. You can charge your phones, shuffle your pack items, look out over the lake and kick back in a nice, warm place. Please don't abuse the privilege. Clean up after yourself.

Saturday, the post office was open from 12-2. It is a contract PO. I was there when they opened and both of my boxes were there. The LAST resupply box (with maps!!!!) and a special box from Barb with a new Quartie (empty quart container, my last one shattered) and a small bottle of Tequila - Yi-Yi-Yiiii! For the record, every resupply box on this trip arrived on time except the ones sent to Lone Pine - they were a day late.

The ferry pulls in about 12:30 pm and all the people from the boat flood the restaurant. Almost instantly, the place had a long line out the door. There goes my burger for lunch - and, damn, no corn dog machine at the store!

Stehekin sits at the top of Lake Chelan. There are a few internal roads but no road connections to the outside world. All vehicles here were barged in via the lake. You can get here by seaplane, ferry or hike. It is a somewhat touristy place but still a great spot for a zero. The town has less than 100 permanent residents and life here seems very simple. Cash works best (bring some!) as there are no ATMs. The restaurant, store and hotel take credit cards.

Stehekin is also the last stop before Canada. Hiking North, the PCT hits the border a mere 80 miles away. By the time you get here, your hike is basically over (but, never say that out-loud!). People in town were congratulating me but I always replied, "Thanks, but I still have a bit to go".

If you have ever watched the Tour de France (bicycle race), you know how that last day is for the man in yellow (the leader). If he is ahead by a minute or so, then his win is practically guaranteed. It is a day of partying. You may recall watching the man in yellow just cruising along, even drinking champagne on his bike (Isn't there a law against this?). Well, the last leg of the PCT, from Stehekin to Canada is somewhat like this. Hikers are jovial, happy, feeling good. Many pack special treats: Beer, champagne, or even Tequila (!!) to celebrate with at the monument. Heck, if one has gone so far for so long, 80 miles more is like a hike around the block. You can see happiness on their faces, you can feel the vibes.

I was on the 2 pm bus out of town. We had a good group of thru-hikers on the bus. Mr. Fox and Rock Locks (as a couple, called "Fox and Locks"), Garfunkle, Funion, Meow Meow, SpiceRack, Liz, and Trip. There were a lot of smiling faces on this bus and lots of laughter and joking around, especially when the cowboys climbed on and started stuffing rifles in the seat behind Rock Locks. First stop was the bakery. It would be only a 10 minute stop. I was salivating as the bus pulled up. Visions of stickybuns, cinnamon rolls, donuts, and turnovers all danced around in my head. Walking inside, I looked at the pastry cases. There was nothing! NOTHING! Ok, there were some bagels and cookies, but I didn't want bagels or cookies, I wanted a stickybun!

It appears that a load of tourists that came off the ferry took the 12:30 bus to the ranch and stopped at the bakery along the way. They must have been an especially hungry lot as they cleaned the place out. "Oh well," I thought. "How about three bagels and some cream cheese." They would work well for my lunches.

We arrived at High Bridge campground at 3 pm - Everyone seemed to be reluctant to hit the trail right away except for me and one other hiker (Trip). Up the hill we went. The Canadian border was a mere 80 miles away. Would I need three or four days to make it? Well, really, it was 88 miles, as the trail continues past the monument to Manning Park, BC. Already I was beginning to make a plan - Today obviously would be a low mileage day but if I could trim the number down, I could reach Canada by the 27th.

The trail follows the Stehekin river for about six miles then follows Bridge Creek. I was moving pretty good and none of the others passed me - (of course, they could have hung out at the bus stop for a couple of hours). As dusk settled in over the hills, I started looking for a campsite. The terrain wasn't very cooperative but at mile 2584, I crossed a fairly large stream with a waterfall. On the other side of the stream was a small flat spot on decomposed granite - perfect cowboy camping for one!

Up above me was an odd bridge. I climbed up the boulders to discover an old suspension bridge. It appears that the PCT used to cross this bridge. You could even make out the old trail. What a cool find! I was tempted to take a walk on the bridge but decided against it, not knowing its state of integrity.

Back to my cool *camping for one* spot. I set down my ground cloth, blew up the neoair, ate dinner then lay down and looked up at the stars. A satellite went zipping by overhead as I dozed off to sleep. At 10 pm, I was awoken by drops of water hitting my face. I looked up. The stars were gone. Damn I thought, it was starting to rain. I bolted from my bag, grabbed the tent and put it up as best I could on this tiny plot of real estate. Fortunately, the tent is freestanding. I was able to extend out the fly lines by tying them to small rocks and then loading up heavier rocks on top. It took about 10 minutes - meanwhile, the rain was increasing. The vestibules of the tent were working well but one side had a big boulder in it. I could only enter and exit from the right - but that was fine. The tent seemed solid and I was now warm and dry as the rain storm increased.