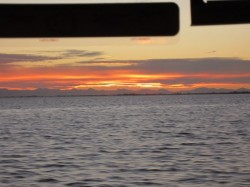 View from the train, heading to Bellingham, WA

Raindrops Keep Falling On My Head

From Manning Park, BC, I took the 11 am bus (9/28) to Vancouver, BC, then a train down to Bellingham, WA. I have some good friends there (Jeff and Jayne). I stayed with them for two nights then took another train to Portland.

Barb arrived in Portland on the 30th and just by chance, Wrangler was there too. He was flying back to Ashville, NC that evening. So we had a party. Went out for beer and food and continued the party in our hotel room. Boy, Wrangler has lost a lot of weight. He started on the trail at 190 and is probably about 150 now. He told us of his encounters with animals. He seems to be an animal magnet. When he hiked the AT, one night, he was cowboy camping, and all zipped up in his sleeping bag. Only his face was exposed. Well, at about 3 am, he was awoken in the darkness by an animal licking his face. Slurp, slurp! Now that would freak us out and he told us it freaked him out too! We figured it was a deer, looking for some salt.

But, check this out. This year when he was on the PCT, near Shelter Cove (Oregon, mile 1915), he had a close encounter with a mountain lion. This was no apparition. It was nearing dusk, and Wrangler had set up his tent. He was sitting inside it (mesh only, no fly) and just happened to look up. Not more than 15 feet away, and up on a knoll just above his tent was a mountain lion, crouched and looking right at him, sizing him up maybe, or just curious. Yeah, he was flipping out, big time but didn't panic. He told us he did the first thing he could think of and that was to get out his cell phone and start playing ring tones. He tried the buzzer, nothing, then the ding dings, still nothing. He tried about 5 different tones then happened upon the circus music. Well, when he played that, the mountain lion leaped upward and took off like a Daytona race car. Remember this people, and keep your cell phone handy.

You meet a few people on and off the trail that you know will be your friend for life. Wrangler is one of those people - we met him on day one at Lake Morena and have partied a lot with him at some zero spots yet we have never hiked with him. Seemed like he was always leaving a town when we were arriving.

On September 3rd, I was kicked off the PCT because of the Dollar Lake fire. I was forced to hitch to Cascade Locks and missed the entire last section of trail, some 37 miles. It felt odd to hitch to the Oregon / Washington border and I felt that my hike of Oregon was incomplete. I had to make it up. With Barb and a car, I could now pull it off in two segments of slackpacking.

We drove to Zig Zag, OR, and on day one, Barb drove me up to the Ramona Falls trailhead. This was the spot where the ranger kicked me out. It was odd being back here. I hiked for 8 miles that day, up to Lolo Pass. Barb was at the pass and picked me up. We spent the night in a cute little cabin near Zig Zag. The next day, Oct 2, very early in the morning, we went back up to the pass and Barb dropped me off. I would slackpack the remaining 29 miles to Cascade Locks.

It's funny how our journey started out with a big slackpack (from Campo to Warner, 110 miles) and is ending on a slackpack as well. I was on the trail at 6:45. The trail was fast, I was light and the weather was cooperating. Boy, such a beautiful area. It contains the Bull Run Watershed - A protected area that serves as the primary drinking water supply for the City of Portland. Today was especially spectacular. There was no rain but lots of clouds. The ferns and mosses were sparkling with moisture. The mountains off in the distance were holding pockets of clouds. It was just a beautiful sight.

I stopped at about 8:30 to absorb the sights. I don't really know why but I became overwhelmed by emotion. Tears started streaming from my eyes. I think I finally realized that my PCT journey was finally coming to an end. I was sad, very sad. I guess at Manning Park, I was so wet and cold, I couldn't wait for it to end, but here today, I wished it wouldn't end but knew now that it was. There was a very light mist in the air and I flashed on the soundtrack song from the 1969 movie, Butch Cassidy and the Sundance Kid.

Raindrops keep falling on my head but that doesn't mean my eyes will
soon be turning red. Crying's not for me cause I'm never gonna stop
the rain by complaining. Because I'm free. Nothing's worrying
me.

This emotional roller coaster went on for about 20 minutes as I reminisced about all the people and places I had seen and all the trail I had covered. I realized that mother PCT really had taken good care of me as she got me through it all in one piece. Yes, you had to follow her rules and go where she directed you but in the end, she was looking out for you. "Hey Jack, it's a trail, just a trail." a voice boomed in my head. Well, if you are on the PCT for a long time, you become part of it, at least temporarily and for me, the trail had become personified. I was mad when the ranger separated me from my trail on Sept 3rd and I was sad now, for my journey on her winding, climbing path northward had finally come to an end.

It was just me and the trail today. I saw no one until about 10:30 when I ran into Greg, the hunter. He had just arrived at Indian Springs and was out looking for deer. Really nice guy and after I left him, I realized that if there were any deer to be found, I surely had spooked them away. Sorry, Greg.

Then I hit the big downhill. Of the last six miles, the first four are really steep. I believe the first two mile profile is 1,600 vertical feet - imagine having to climb up this thing! The second two mile profile is around 1,100 feet and of course, Cascade Locks is the lowest point on the entire PCT so, now it was down, down and down. One might think that going down should be fast but for me, it is slow, especially when the trail has a rock garden strewn along it. I would plant my poles forward to slow my progress otherwise I would pick up too much speed and before I knew it, I would be jogging down the trail. It wrecked havoc on my feet, ankles and knees. My 5 pm finish became 5:30, then 6. I would end out averaging 2 mph over the last six mile interval.

Barb knew I was coming in and had up hiked about a mile of trail. She had the car waiting at the trailhead. A light rain had started. It was really the first real rain of the day. Now I felt that Oregon was truly done. My PCT hike officially ended today, Oct 2, at 6 pm. Tomorrow, we would drive down to Windigo Pass and check things out. There was a segment here I could hike or skip, my choice.