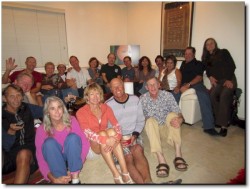 Party time with our hiker friends

For those of you hikers in the know, PTSD stands for Post Trail Stress Disorder. It happens to many hikers when they return home from a long journey in the wilderness.

It wasn't like I was totally removed from civilization for five months. Heck no, I even drove Louie Dewey’s big truck on the freeway at 55 mph near Mt. Shasta (July 10th). I didn’t really want to but it was either me or the Kiwis – and they drive on the left in Kiwiland - that would have been a horror. And, it wasn't like I was alone for the last two months. I visited many small towns along the way. I ate in restaurants and even mingled with the tourists at places like Crater Rim Village.

But, coming home was different. We landed at San Diego airport at midnight on a Thursday night (October 6th). I went right to bed. Next day, I was looking around our house. First I noticed the ceilings, eight feet high. Wow I thought, I live in a house with eight foot high ceilings – how roomy, how nice. I looked in my closet. Man, look at all these clothes. How could I ever hope to wear all these shirts in one lifetime? I picked out a nice Hawaiian shirt and put it on. I could wear this one for an hour and come back and switch it out for another.

I put my wallet down somewhere in that cavernous 1,000 square foot home of ours and then spent half the day looking for it. Yes, there was a place in my pack where it always lived for the last five months but it wasn't there. The backpack only had the usual things and reeked of mildew. Yes, I was stressed. Yes, I was hating it, wasting a couple of hours searching for my wallet and, yes, I let out a scream, much like a loud “Arggggggghhhhhhhhh”. (I stopped looking, settled down and later found the wallet).

There was a large box of mail sitting in the living room with my name on it. Magazines, five months of magazines! Ok, Backpacker was one of them, I can set these aside and slowly get through them. The truck needed registration renewal, but had to get smog tested first. Better move that up to a high priority item. There were bills as well, some overdue.The city of Encinitas wants me to cut a big branch off one of our trees - they say it impedes the ability of fire trucks to get by on the street. Am I ready to light up a chain saw and rip into a tree? And, there was a ton of junk mail, mostly from insurance agencies that wanted to sell me a Medigap policy. I was getting overwhelmed. I pushed it all aside.

What else is happening around here? The screen door is about ready to fall off. The handle on the toilet was falling off – that was and easy fix. I lit up my computer. Oops, Norton Antivirus was way out of date and would be expiring in 13 days. No, I didn’t want to renew today, remind me later.

Barb had a welcome back party on the first night back. It was to be a small party with just our close hiker type friends but as parties sometime take on a life of their own, this one grew to about 20 people. Two of our friends from out of state even heard about it and wanted to fly out from Michigan and Colorado. Jeez, I only went on a long hike, it’s not like I returned from a circumnavigation of Antarctica.

I was doing ok, having a fun time answering all the usual questions. “What was your favorite place” (answer: Washington). “Didn't you get sick of your backpacking food?” (Answer: No, I could eat Mountain House Beef Stroganoff every night. I think) and “Did you see any bears?” (Answer: only one, but I saw some very strange monsters on a night hike).

Then, in the living room at about 10 pm, PTSD hit me. Everyone seemed to be talking at once but in reality, they were talking in small groups about various things. The sound reverberated off the walls and the tile floor. It was so loud and chaotic. It pounded on my ears. I had to get away. I went outside in the back yard. It was quiet, it was calm, and the stars were out. At that moment, I wished I were back there, in one of those cool campsites with a log, brisk evening, stars out, dipping my long Teflon spoon into a mylar bag of rehydrated food. I stayed in the backyard for about 10 minutes, recovered a bit and went back inside.

The next few days went better. I started getting things done. Seems that all my camera images and videos made it home. Back journal pages needed to be written. It was nice being able to write them on my home computer. Norton anti-virus kept popping up to nag me – I kept pressing the “Remind Me Later” tab.

I probably should have been walking, at least a mile or two every day but I didn’t. My first exercise since returning home was to go surfing. It was a perfect day, much like a perfect hiking day. Sunny, no wind, glassy ocean water with nice little 3-4 foot peelers and only 10 people out. It was fun but my paddling muscles were not to be found and with my numb toes and odd feet, my first two waves made me look like a kook (that’s someone who can’t surf). I caught 6 waves over the period of an hour, and then my arms were so tired I realized I probably couldn’t catch another but I did as it's against the rules to paddle back to shore.

Kimo (Jim) made a surf movie from the water with one of those little HD waterproof cameras. Not of me but of a friend of mine, Randy on a stand up board. It will give you an idea how nice and fun it can be here in the ocean. Watch it here. Kimo was riding the same wave and shooting video. He makes good movies!

A week later, a reporter from the local Coast News paper came by to interview us for a follow-up story. You can read it here. (and the original article dated April 22 here - page A7) and, for even more, a local blogger did an online interview here.

Back to the PTSD.

There is a cure! Go back to the wilderness or even semi-wilderness. You will feel at home. The stress will go away! That’s what we did. We packed up the Ford ranger to the gills with “stuff”. There were boxes of food, ice chests, bottles of beer and wine, even some tequila. Plus a BBQ, and much more - maybe a couple hundred pounds of "stuff" for a week away from home - the antithesis of our meager possessions on the trail. We drove up to Mammoth, spent the night with our PCT angel friends, Diane and Bobby then continued on the next day to Bridgeport, on the Eastern side of the Sierras. Then, it was up a dead end road for 13 miles to Twin Lakes. There we rented a nice little cabin for a week. A small group of five friends were there as well. We were in the semi-wilderness and we could hike from there, on short day hikes.

This week-long trip has done wonders for my psyche. I’m in civilization but I’m not. We hiked every day but would call them neros because that is what they were. Four miles, eight miles, six miles, and, on one day, we drove up to Tuolumne Meadows and hiked the PCT to Glen Aulin, eleven miles round trip. It was fun being back on the PCT. I was last there on July 27th, and there were hoards of people. This day we saw only eight. Plus, Barb racked up another 5 PCT miles for the season. Her final mileage is 1,060.

My feet hurt at first (7 on the meter) but after a few days out, they felt no worse than they did on the trail (a 3 on the meter) – Thank you advil! In the late afternoons, we would return to the cabin, get a hot shower, fix some way cool dinner (Ribs, Lamb stew, Jambalaya), and, as evening fell, we would sit around a campfire with our friends. Hiker midnight seemed to be getting later with each evening. We made it to 10:30 pm on the second night.

I could look up from upper Twin Lake and see Matterhorn Peak. Three years ago, Barb and I climbed that mountain. And how much further is the PCT, I wondered? I lit up George and looked for the nearest waypoint. Dorothy Lake at mile 977 was the closest point at 12 miles away as the crow flys or 22 miles hiking. How I remember that area - It was one of the few places where the mosquit'O meter hit a 10! The second closest waypoint was mile 999. I guess the PCT makes a big turn away then comes back somewhere up there. I flash back on the memory of making the 1000 mile marker. It wasn’t 1000 miles for me at the time, but I made one anyway. That marker should still be there, just over those jagged mountains to the Northwest.

The PTSD was gone.

We left Twin Lakes and headed home but first with a stop in Bishop. As you head down the hill toward town, you see a prominent mountain off to the West. Called Mt. Tom (13,658 ft), it has obsessed me for years. Barb and I tried to climb it in 2007. We were turned back. We would try again. This time, we were more acclimatized and in better shape. We hiked up to Horton Lakes on Oct. 24th and set up camp. We were back in the tent again and eating Mountain House dinners! How Fun! On the 25th we started out from camp with only light packs. From Horton Lake it is a series of switchbacks to an upper saddle, then a contour on an old tungsten mining road at 12,000 feet. From there, a scramble over loose rocks and boulders to the summit. At 12,100 feet, we were turned away again, this time by bitter cold and high winds. Maybe the third time will be the charm.

We are home now and everything seems good. The PCT is a fond memory and this journal is such a wonderful documentation of our journey. It was sometimes a pain to put up these pages and upload images and I lost a lot of sleep writing this, but now we are so glad we can go back and read a little story for every day of the trip.

So let this be known to you long term wilderness hikers. If you come home and get PTSD – Yes, you're stressed, but you don't have to be. You can shake it by taking a small trip to the wilderness, or even pitching your tent in the backyard and mixing up a package of Idahoan potatoes. And if you took pictures or have a journal, flash back to your time on the trail, both the good and the bad. Life doesn't have to be stressful, remember, you can always press the "Remind Me Later" button.