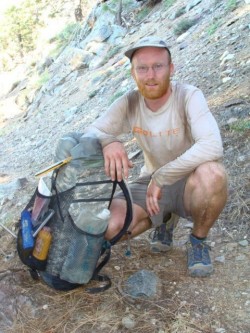 I can't say I'm completely certain yet, but I'm certain enough to post this first journal entry. I've been plotting and planning for months, and it looks like it will probably work. So, to all who will be hitting the trail this season, I'm tossing my hat in the ring. I probably won't make many updates prior to hitting the trail, but I will be playing around with the "plan" and "gear" sections a bit as I prepare. For now, May 5 is my start date, although this could change a little one way or the other.


Last year, on May 4, 2010, I started north on the PCT from its southern terminus near Campo. I made it as far as Yosemite. I hiked up Mt. Whitney on the John Muir Trail and when the JMT split from the PCT for the short section after Red's Meadow I stuck with the JMT. I ended my hike in Yosemite Valley after completing the entire JMT and about 1/3 of the PCT. When I began that hike, I had hoped to do a fast thru hike of the PCT, finishing on or before August 25 (school started on August 26). Reports of heavy Sierra snow lingering in that high country and the realization that I wouldn't enjoy the pace my schedule required made me re-think my original plan. I decided to stick with the group of other great hikers I was with and hike just a portion of the trail, then return early to work and get ready for my last year of school, which began August 26. It was a good decision, and I greatly enjoyed hiking through the desert, and the southern Sierra's with Furious, Cloud Kicker, Rocky Raccoon, and Team Zero & company. After leaving Yosemite and the PCT on July 5, it didn't take long before I began thinking about PCT round two.

I'm planning to hike with Furious again this summer. He too was not able to finish the entire trail in one go because of school. I'm definitely happy to be planning along with someone else as that makes it even more exciting.