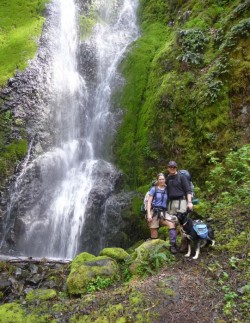 Our first backpacking trip together, Hermann Creek Trail, OR

How the Dream Was Born

Here's how it began.

Three weeks into dating, in March 2010, Colin's friend advised him we were moving WAY too fast to be discussing marriage and kids. "Whoa, you have to get to know each other, spend time, take vacations together." Colin thought about his friend's advice. He knew that Deb had hiked the Appalachian Trail, and hoped to hike the PCT someday. So he explained his friend's reservations, and proposed a plan: "What do you think about hiking the Pacific Crest Trail together next year?"

So the dream was born, and we haven't stopped talking about it since.

And nine months later, Colin proposed again. This time with a ring, on snowshoes, just below the summit of Vermont's Mt. Mansfield (in Deb's home state). And shortly after, we gave notice at our respective jobs. The wheels are now officially in motion.

Organizing a long-distance hike is a daunting task. Colin has his hands full planning our itinerary. Deb has the dehydrator going and is stockpiling pasta and instant soup. We are both researching gear and deciding what to change or upgrade to reduce our pack weights. But add organizing a wedding to it? No way. We have our priorities, after all! PCT 2011, wedding will have to wait until 2012.

Colin, not yet baptized with his trailname, spent many college weekends driving up to the White Mountains in New Hampshire. He continued hiking in California, and then OR/WA, mostly day hikes. He climbed Mt. Hood last summer on a guided trip, his first mountaineering experience. The PCT will be his first long-distance hike.

For those of you who don't know, thru-hikers use "trail names". It saves them from having to distinguish John from John and Jane from Jane. It gives them a way to put aside the trappings of the real world, as if deoderant and blue-jeans and pillows weren't enough to put aside. It makes for funny stories. Some hikers give themselves trail names, like Topsy Turvy did in the middle of a handstand on her AT'98 hike. But many opt to let the thru-hiker community name them. [Colin: I'll be one of those. I'll have to wait. So for now I'm just Colin.]

Are we looking forward to it?