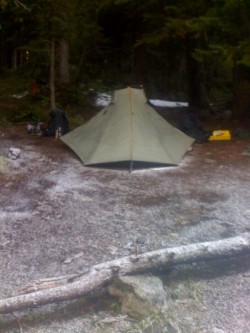 DATAmuffin had a bit of a scare last night. I went to sleep while he was still working on his journal. Apparently, he was half out of his sleeping bag so he could write, then wrapped himself up to go to sleep. But he was already quite cold, and started shivering uncontrollably. Next thing I knew, he was waking me up and saying he might be in trouble. He sounded panicked. We opened the zippers on our sleeping bags so I could get close to him and warm him up with my body heat. He shivered on and off for several minutes, but eventually he warmed up. If he hadn’t, I was prepared to break out the stove and get him some energy bars and peanut butter for improved “internal combustion.” He was quite freaked out by it, and I had to calm him down. He said he’d never felt anything like that before.

It was a very cold start in the morning. We had ice on the tent. DM didn’t have any more shivering problems, but said he slept poorly and very little after 2 AM. We had no water for cereal, so we ate some bars, peanut butter, and a couple of carrots leftover from the organic farm in Stehekin. Eurotrash and LaFawnduh beat us out of camp. Putting wet, cold clothes and shoes on was the best! The tent was wet and the tent bag ripped while I was helping to stuff it in. Oops. We already have a busted zipper on my tent door that I’m blocking with stuff sacs while sleeping. Good thing we’re done with this hike in a couple of days.

Even though it was cold, the sky was clearing and the rain seemed gone for good. From Glacier Pass, we continued to climb. Soon great views of mountains to the West opened up, with a fine layer of snow, basking in the sun. Unfortunately, it was cold shade for us as we climbed switchbacks to the top of the ridge. The snow on the trail increased as we climbed, until we were on three to four inches of powder near the top. Besides the fresh footprints of ET & LF, we saw deer, coyote or cat, and rodent prints. Now in the sun and with great views, the hiking was much nicer – though it was tiring in some of the deeper patches of snow.

We traversed, never seeing the stream we were counting on for water at about four miles. We had no choice but to continue on to Harts Pass, the last road before the border. There we caught ET & LF, drying out their gear in the sun. We followed suit and ate lunch. I sewed ET’s ripped sock and our tent’s stuff sack. Meanwhile, DM resorted to collecting snow to put into our water bottles, our desperate attempt to get drinking water. Later, some campers came by in a car, and DM had to ask if they had any water they could give us. They did, but it came from a plastic water bag and tasted like soap. We sipped a little to quench our thirst, but we were really hoping for some better water on the trail.

ET & LF left before us (as usual); we didn’t get going until 2:15. Just about half a mile up the trail, we came across a creek, not marked on our maps. Hooray! I’d been eating snow rather than drink the nasty water we got from the campers, so we were very happy to have a fresh water source again. It tasted wonderful! (I rinsed my mouth out) We filled up and continued climbing along a grassy open slope. It was so warm, I could actually hike in short sleeves!

We met several day hikers headed back to their cars, then nobody as we got further away from the parking area. There was a large yurt in the distance to the left, but no sign of occupation. After some small ups and downs, we had a long switchbacking descent to Holman Pass. There were some dry campsites here, but we pushed on for two miles and a thousand feet of gain, to a spring with camping above 6000’. It was dark when we arrived. Goodness and Zim, and ET & LF were all finishing dinner; we felt a little late to the party. Goodness and Zim had already hiked to the border, and were on their way back to Harts Pass to get a ride back home. It felt a little weird that we were now only fifteen miles from the border. DM got water at the spring and then we cooked outside, but ate in the tent to stay warmer. Pesto pasta – one of our favorites!

DATAmuffin’s daily rating: 8. SO happy to be getting some improving weather for our finish. The upside of the precipitation we've gotten for the past two days is that the mountains have fresh snow on them, and the views are gorgeous.