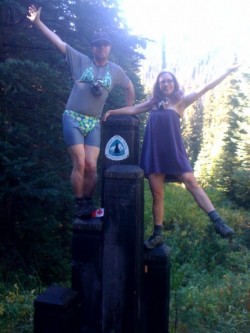 We've had a running discussion with Eurotrash and LaFawhduh about whether to get to the monument at the border and camp, celebrating our victory and welcoming other hikers as they came in, or to just hike out the 8 miles from the border to Manning Park, where a bed, showers, and restaurant food await. LaFawnduh's parents are due to arrive around noon tomorrow, so either way would work for them. It's just a matter of what WE want to do. The discussion has been going on for several days, but lately, as conditions have gotten harder and the prospect of cleaning up and treating ourselves a bit before the ride back home has materialized, the consensus has been slowly settling toward the "hike out" option. Topsy and I were content to do whatever ET & LF wanted, but I think privately we've both been hoping they would want to hike out. This morning, after another cold night (though not as cold as the night before), ET & LF informed us that "hiking out" was a "strong option". We were only 15 miles from the border, we'd probably get there by early afternoon, did we really want to stay there all afternoon and night before hiking out in the morning? The "stay put" option was seeming less and less like fun, to them and to us. But it wasn't quite settled yet.

Eurotrash and LaFawnduh headed out before us, and we agreed to meet them at the border if we didn't see them sooner. Topsy and I were out about half an hour later. We said good-bye to Goodness and Zim, who have to hike back to Hart's Pass because Goodness doesn't have entry papers for Canada, and hit the trail.

The weather was even better than yesterday. Nothing but bright blue sky overhead, and comfortably cool, if not exactly toasty. We had some climbing to do right off the bat, with the usual stunning views opening up as we made our way up and over Rock Pass. A few inches of powder graced the side of the trail in places, reminding us of the precipitation we had recently endured. But for now, it was all pretty and pleasant and back to the joy of hiking. On the switchbacks down from Rock Pass, someone wrote "12 miles to Canada" in the snow. We thought it was more like 13 and dutifully changed it, so as not to disappoint future hikers. We're so conscientious. A little ways past that, we saw another snow-note, this one undoubtedly directed to us: "YOU'LL NEVER MAKE IT". It's the running joke between us and ET & LF, ever since, back at Goat Rocks, Eurotrash joked that he wanted to do "anti-trail magic": stealing hikers' supplies, putting rocks in their packs, and throwing discouraging words in their direction. We laughed at their last doomed attempt to discourage us and hiked on, bound and determined to make it after all. 13, not 12, miles to go.

The trail after Rock Pass switchbacks steeply down, crosses a valley, then prompty switchbacks up again toward Woody Pass. The PCT used to traverse straight across between the passes, but it seems the trail was too steep and rocky to be maintained safely, so was abandoned in favor of the more tiring down-and-up that we faced. We could see the old abandoned trail, and were glad for the new one, for the old one certainly seemed treacherous. Still feeling my usual fatigue of late, I huffed and puffed back up towards Woody Pass.

From there it was a long, scenic traverse, then a wooded descent to Castle Pass, followed by more wooded descent to Canada. About a mile from the border, we stopped to change into our "ridiculous oufits". Weeks ago we had agreed with Eurotrash and LaFawnduh to wear ridiculous outifts for the border crossing. Back in Portland, Topsy had decided to wear a glittery wraparound skirt as a short, goofy dress, and I had decided to wear one of her bikinis, over my hiking shirt and underwear (it would be too revealing otherwise!). Alas, Eurotrash and LaFawnduh didn't really follow through on their end of the bargain, and had simply settled on Eurotrash's scarf of the Finnish flag. Oh well, we were content to be the only ridiculous ones.

Approaching the border we could see the swath of clear cut that marked the straight-as-an-arrow border between the United States and Canada. We dropped on a few switchbacks to meet it, and came upon the crossing more quickly than we expected, at around 1:30, where ET & LF were sitting and waiting. Topsy had tears in her eyes as she approached the monument, but as ET & LF saw our outfits they burst out in laughter, and any gravity the moment had was quickly drained away. Still, Topsy and I touched the monument hand-in-hand, kissed, then exchanged exuberant hugs with ET & LF, our close hiking companions through much of Northern California, a bit of Southern Oregon, and just about all of the state of Washington. It was truly an occasion to celebrate.

And celebrate we did. After several rounds of photos, with ridiculous outfits and without, and a couple of photos to remain ever private, we finally broke out the bottles of liquor we have been carrying since Skykomish, some 180 miles back. We mixed hot cocoa with Baileys, orange juice with vodka and 7-Up, and Dr. Pepper with rum (Dr. Rumpers), while Eurotrash lit a cigar. It was already quite chilly at the monument, and there was no question now about our intentions for the night - we would hike out to Manning Park. Topsy and I signed the monument register (ET & LF had done it before we arrived), post-scripted with a comment that ET & LF will never make it (to Manning Park), and we all hit the trail for the final 8 miles at around 4 PM.

Our reader may recall a similar celebration way back at the California/Oregon border, with rum and Pepsi (rumpsi's) packed out from Seiad Valley. Back then, we had each consumed a more-or-less equal portion of libations, and it became quite evident that the boys' tolerance for alcohol was a bit higher than that of the girls. So while the girls had hiked out a bit "happy", the boys largely missed out on the fun. We aimed to improve upon that situation this time around, so Eurotrash and I were told to up our share. We both obliged, but I think I may have "obliged" a bit more than Eurotrash as, by the time we were ready to leave, I was, shall we say, having quite a bit of fun. I've never hiked in such a state before, and while ET & LF set their usual brisk pace with Topsy following suit, I struggled along in the back, taking great care not to stumble off the steep slope to the side of the trail. I won't lie: it was a GREAT way to finish off the 8 rather boring miles and 1000 feet of up and down to Manning Park. The culminating moment was when we crossed a creek on a footbridge, but Eurotrash joked to me that I should cross on a log, some 100 feet downstream, just like old times in the Sierras. I accepted his challenge, and before anyone could stop me, I was treading carefully across the downed tree, hoping my ambitions did not exceed the limitations of my physical and mental faculties at the time. Luckily, I made it across without incident, and we all shared a good laugh over it. It was one for the books.

Finally, as darkness was approaching, we hit the road that led the last few hundred yards to Manning Park, marking the very, very end of our hiking journey. Eurotrash was overjoyed that the speed limit signs were in kilometers per hour (much like his homeland of Finland), and we all laughed at the irony of a yellow pedestrian sign, displaying a walking stick figure, much like us, only we'd done a wee bit more than cross a road to get here. Maybe the alcohol, even after 8 miles, had not yet fully worn off, but we were giddy with excitement. We'd finished in strong, joyous, and crazy fashion.

We checked in to the Manning Park Lodge, which, strangely given the lack of cars in the parking lot, had only one room available, even though, as two couples, we were seeking separate accommodations. But the two-bed suite was very nice and a fitting location for our last night before going home, and soon we were stinking it up with our gear. We had been told that the restaurant closed at 8, so - having arrived at 7 - we quickly showered then headed over for some grub. But to our dismay, the place was already dark, and a lone server was putting the finishing touches on closing up for the night. The posted hours clearly showed a closing time of 8, but it was 7:40. We were devastated. Eurotrash put on his best sad face and pleaded with the server to help us. There were no other food options available, and we were desperate to avoid having to microwave our last backpacking meals for our celebratory dinner. Then, much to our surprise and joy, the server took pity on us, and persuaded the dishwasher, who was busy performing his own closing duties in the back, to make us some turkey sandwiches: two each, with Pepsi's. She threw in a couple of muffins for our pre-breakfast in the morning (the restaurant didn't open till 10 AM - what gives, Canada???), and sent us on our way, about the happiest anyone has ever been to be looking at turkey sandwich dinners. We chipped in a substantial gratuity for both the server and the dishwasher, who had given us our last bit of trail magic we would receive in our PCT experience, and returned to our room for a satisfying last dinner, and a round of "The X Factor" on the TV.

A truly strange and wonderful ending to this adventure.