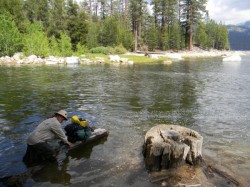 Out of Bear to VVR, Bridge Out!

I had trouble sleeping with the prospect of the island flooding and us getting swept down a tumbling creek stuck in a tent. Fortunatley it didn't happen. The tent and my bag were both wet and I got out and restarted the fire. I left the coals buring all night and threw wet pine cones on top since we were on a soaked island I knew there was no fire danger. Once I got the fire going again with wood I had left surrounding the fire to dry out the night before, I got the coffee water going. The river had only gone down 6 inches in the night and I was really hoping that was enough. We still had the roughest part of the river to go through. I managed to rouse Sprinkles despite the prospect of a frozen river crossing at 7am. WE got our stuff together, doused the fire and headed out on a slightly different tack than we had tried the evening before. There had been a gnarly looking rock that I hadn't wanted to cross in front of yesterday; but, I decided to check it out this time and it was the best idea. I might even have been able to have crossed there yesterday had I tried it. It just goes to show that you gotta poke around a bit to find the crossings. Regardless, it was probably a better idea to go back than to risk going down in that creek (we would later hear about a couple people getting medevac'd out after going down in that stream)

WE were glad to get the hell out of there and we only had about 10 miles to go to Vermillion Valley Resort (VVR), a camper's resort on the far side of Lake Edison. A lot of hikers drop in ther for a night. They give you the first night and the first beer for free if you are a PCT thru-hiker. There is a ferry that takes you from one end of the river to the other side which avoids an unnecessary 4.5 mile hike around the lake. From Bear Creek it was basically a bunch of descent so we we made great time, except for all of the blowdowns and avalanche downed trees that crossed over the trail. When a tree goes down over the trail, it's no simple task to get over it or around it. Generally it creates so much destruction that you lose between 2 and five minutes circumnavigating it. It can be dangerous as well if you try to go over the blowdown because you're scrambling over sketchy branches that may be cracked or don't support your weight and have you falling into the middle of a mess of branches and rocks and dirt, upside down and tangled, which takes a couple minuted to get out of. It's usually better to just walk all the way around the tree but sometimes the terrain is such that you can't do that very easily. This day was full of downed trees including a behemoth of a tree at least 8 feet in diameter that was completely impossible to get over and on such a steep slope that it took five minutes to get around it. Under normal circumstances you could have gone a quarter mile in that time!

We got down to the cutoff for VVR and decided to head in. I made a deal with Sprinkles that if he didn't smoke any cigarettes til we got to Mammoth that I would pay for everything at VVR. We got to the ferry landing at 1pm and it only comes twice a day, once at 9:45am and once at 4:45pm. Sprinkles wanted to just chill out for 4 hours and wait but I convinced him that we could just hike the 4.5 miles around the lake and be there in an hour and a half. I figured the hike would be a casual, flat hike around the perimiter of the lake but it wasn't. After about a half an hour I was already regretting it. The trail went up and down a couple hundred of feet several times for no apparent reason. If you've been reading this blog then you know how I feel about that. I was getting pissed. Finally, after about 3.5 miles we arrived at a river whose bridge had been washed away wahat appeared to be years ago. First I was pissed at the resort for not putting a sign up by the landing saying the bridge was out, then I was embarrassed because I convinced Sprinkles to come this way, then I was incredulous that there was no way to cross this thing. Literally, the river was impassable!

We followed it down to the lake edge to see if there was a shallow way to get across and found that the channel to cross was extrememly deep and at least 60 yards across. I was FUMING! I stood on a rock on the lake beach and yelled across the lake in frustration at the resort which by now we could see only a half mile away over the water and a mile waway by trail. I was not going to walk back! there had to be something. I looked around. Sprinkles was pissed too I could tell. Then, I got an idea... All around the lake there were huge trees that had been downed over the years by avalanche or old age and they litered the beach. I spied a split log, about 2 feet in diameter and 5 feet long in the underbrush. I called Sprinkles over to help me pick it up and carry it to the water. It must have weighed 250 lbs and it was split in half so it was flat. We got it in the water and it floated... I put my pack on top of it and it still floated... I added Sprinkles' pack to it and it still floated... I looked at him and we decided to try it. The water wasn't that cols so we stripped off most of our clothes and climbed in the water. I got behind the log and gently pushed it as I did the side-stroke like my Grandpop taught me as a kid when you had to push or pull something in the water. Suddenly, about 10 yards in, as we got into the middle of the flow, the water got unbelievably cold and I was having trouble breathing. The water went from 60 to 35 degrees in the space of about a foot and I was fighting for air and trying not to push or pull too hard on the log and upset the delicate balance. Sprinkles swam ahead a little. Neither one of us could breathe and he got to the opposite shore and helped drag the log in. WE MADE IT! We were so proud of ourselves. There had been some people who took some pictures who had been on the other side. Thank god we wouldn't ahve to walk all the way back across the lake! We couldn't wait to tell someone this story! We put our clothes back on and finished the hike around to the lake.

When we got to VVR, the first thing we did was to tell everyone at the bar about our bold adventure, at which time we were informed that there was a new bridge that had been built just a few yards upstream from the old one... SHIT!

We set up our tents in the camping area and got some dinner. Jim owns the resort and he's a former Marine so he's cool in my book. It was a little expensive but when you find out about the ridiculous road which is the only way you can get up here, you decide it's not that bad. I added a little bit to my food reserves, I figured we'd be in Mammoth in two days, I wouldn't need much. We hung out with Yard Sale and Tails and Skeeter. Hans showed up on the ferry with Vit and we all hung out all night, telling stories around the fire with some people who were car camping there. I met Bobby, a four Y/o girls who just wanted to play with my headlamp and run around the fire all night. We talked about stars and planets and space and the moon and marshmallows and fire and LEDs and batteries and washing machines and just about everything else before she finally passed out in her mom's arms and they went back to their campsite.

Mr. F Gentle Spirit is a former US Marine, professional ski instructor at Heavenly Lake Tahoe, and a Southern California Jazz singer and entertainer David Patrone, who is performing Jazz shows all along the PCT. Follow him as he walks from Mexico to Canada in support of an amazing cause: Boys To Men Mentoring Network Thanks for reading! I appreciate your passing this along to your friends and I welcome any and all comments!