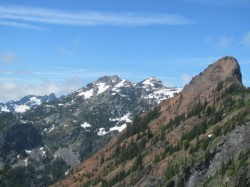 Red and Snoqualmie Mts from the Katwalk

I have been planning my multi-section hike from Santiam Pass (where I left off last year) to as far north as I can go. Initially, I wanted to get going by late July. Methuselah and Uberbitch visited the Jefferson Park area and informed me of solid snow. Last Sunday, I got a positive update from them. There is now more dirt than snow in the Jefferson Peak Wilderness area. That is the first high area that I will need to negotiate.

The plan right now is to get dropped off at Santiam Pass on Sunday, August 14 and start my slog northward. I expect the first 10 days or more to be somewhat painful until I can get toughened up. That is just the way it is for old curmudgens such as myself.

This past Sunday, I did do another training hike north on the PCT out of Snoqualmie Pass. I found 35 to 40 blowdowns before Kendall Katwalk and then some sketchy snow patches just before the Katwalk. From the Katwalk north, it was solid snow to Ridge Lake. Other hikers told me that the snow faded at Ridge Lake and I could see bare trail across the south face of Chikamin Peak. That section is critical - if there is snow on the traverse, it is extremmely treacherous. Right now, I would expect to find snow on any N, NE, or E facing aspect and a few patches of avalanche fan debris on all aspects.