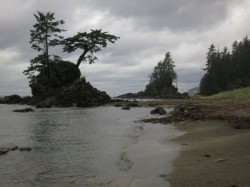 I bid thee farewell, and to all a good night

Well, here I am back home on California's Smith River. I'm sitting on my favorite green recliner, sipping coffee while the woodstove radiates dryness and warmth. Outside a steady redwood coast rain falls, rejuvenating the mosses, bringing the river back up to deliciously kayakable flows and drawing this year's cohort of salmon (Chinook right now) back landward to meet their destiny. I've been hanging around and doing some part time work (try and do to my bank account what the rains are doing to the rivers) and managed to cap off the summer's adventures with a 4 day kayaking trip (weee!) down the Wild and Scenic section of the Rogue River. Thank the stars for people willing to haul gear on rafts while I happily paddle along in my own tiny boat. After a summer of having to carry everything on my back it was wonderful to spend three nights in the wilderness with good food, dry (cotton!) clothes and all the beverages I cared to drink.

But I'm getting ahead of myself. In my last post I was just about to embark on British Columbia's West Coast Trail. Apologies for all the typos in that post, the whole thing was done up at a campground on my phone (thanks mom for the smartphone birthday present). The West Coast Trail is a very popular trail on Vancouver Island that was originally built as a life saving trail for wrecked mariners, although now it is used more as a recreational life threatening trail. It usually has a quota, but that quota is lifted for two weeks in the fall before they close the trail down entirely for the winter. The trail runs 75 kilometers from Port Renfrew in the south to Bamfield in the north over rugged coastal cliffs, mostly logged but maturing rainforest, and rocky and/or sandy stretches of beach. On a clear day the Olympic Mountains down in Washington glitter just across the straight of Juan de Fuca while big open pacific swells crash on the cliffs and beaches. However, being rainforest, it is rarely clear. in 8 days I had 1.5 days of sun, 2.5 days of heavy overcast and 4 days of deluge. To avoid a costly shuttle on an already staggeringly costly trip ($ 130/person for an overnight use permit, $ 32 one way for boat ferries across the big river mouths, $ 30 for one week of parking, etc...) I chose to do the trail in 8 days as a there and back. Although the rain was frustrating, it is the natural state of this region and in many ways enhances the experience. The greens of the forest come out so much more, the ever shifting cloudscapes over the ocean are stunning and since it was early autumn it was actually still pretty warm. Walking along the beach waves would crash and send big, warm steamy breaths of air to engulf me, and you kind of get used to water always running down your nose and lunch immediately becoming soggy. It was mainly the transitions that were difficult. Setting up the tent in a downpour in sand, making that final push to get out of bed and not be dry again until laying down to sleep that night, those were hard. Also, this particular trail traverses such steep, boggy and just generally wild terrain that you are regularly walking on boardwalks, climbing and then descending 20-80 foot high ladders and even crossing streams on "cable cars", which are little metal gondolas (2 passengers) suspended over the creeks on a cable. When you reach these you climb up to a platform, haul the gondola up via rope/pulley system, carefully climb into the thing and let go. You then zipline down to the middle of the creek (weeeee!), at which point the fun is over and you have to haul yourself over to the other platform. Remember you're hauling yourself, your pack and all the weight of the cable car up, all while in a sitting position. Even when the trail travels on the ground you are usually up on webs of tree roots or mucking through and around ankle to knee+ deep mud. Needless to say I was not making 25 miles per day. Fun! I confused a lot of people by telling them that I was doing the trail as a there and back, with "are you out of your mind?" being the common response, and "sure seems like it" being my reply.

So I finished that trip. There were big waves on my last day so after having a shower at the campground I cooked some eggs in the pouring rain (the trick is to keep the flame high enough to evaporate the rain so the eggs don't get soggy) and watched surfers catch some big ones. Then I mosied back across the island and hopped a ferry over to Powell River on the Sunshine Coast. This stretch of coast line is on the mainland (though 2 ferries are required to reach it from Vancouver, giving it the isolated character of an island community) in the protected waters of the Straight of Georgia (the channel between the BC mainland and Vancouver Island). The straight is part of a long semiprotected waterway known as the inside passage, which runs from Puget Sound near Seattle in the south, all the way to the end of Southeast Alaska in the north. Once in Powell River I geared up to set out on the Sunshine Coast Trail. The story of the SCT is an inspiring tale of local volunteerism and land stewardship. A few decades ago a group of friends lead by a guy named Eagle Walz living in the area decided to start building connector trails between the various local hiking spots. Today there is 180km of continuous trail running the length of the sunshine coast, and a long canoe route with campsites. This group's local activism has also been instrumental in the creation of multiple parks and protected areas along and near the trail. Over the years they've picked up some community development grants, and have used the money to build trails (one of which is a long, wheelchair accessible stretch) and build shelters and cabins along the trail. There are many cabins along the trail and you can hike almost the whole length hut to hut. 3 of the huts are winterized with insulation and pellet stoves. Bravo guys. All of this is amazing, but most of the sunshine coast is "crown land" (BC forest service) and contracted out to logging companies as working forest. As such, most of the trail passes through active or very recent clearcuts. Now I have nothing against logging per se, I like wooden building materials and other forest products as much as the next guy. I also like jobs and thriving economies. But as usual, i didn't see a lot of balance in the logging activities, and although "sustainability" is the buzzword of the day, it looked like any other boom/bust economic activity to me. What really angered me was hearing that they were still logging old growth further inland. This planet has so little old growth forest left that there really is absolutely no excuse for anyone to log any more old growth ever. So anyway, instead of hiking the whole trail I just hung out at sweet cabins and read books while the rains came and went around me. I even got to meet Eagle and the BOMB squad (Bloody Old Men's Brigade) at one of the cabins doing some work. Fanfreekintastic.

Next I drove slowly home down the east side of the cascades. Stopped off in Medford, OR to pick up my worldly posessions from my friend's garage. Went to see The Tempest at the Ashland Shakespeare festival (git me some kulcher!) and that was that.

So there it is. That's the tale of Veg, the walking vegetable. I'll leave you with a John Muir quote from a film called Mile, Mile and a Half:

“Wander a whole summer if you can… time will not be taken from the sum of life. Instead of shortening, it will definitely lengthen it and make you truly immortal.” - John Muir

P.S. Mile, Mile and a Half is a great film about hiking the John Muir Trail made by a group of folks that I met in 2011. It gives a pretty good idea of what a long hike is like and is filled with stunning camera work, definitely worth watching.

Also if you're into this sort of thing 180 Degrees South is a fantastic adventure film about a guy who takes a sail boat down to Patagonia for some surfing and mountaineering. This isn't some adrenaline fueled, sponsored Red Bullsh**. The guy is just some dorko who heads out on a long journey and ends up not quite entirely where he intended but nonetheless better for it. It's good stuff.