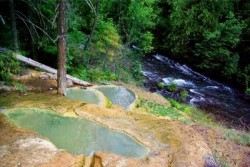 Well, Oregon thanks for nothing, we were expecting the streets to be overflowing with free gold and ice cream, but instead all you have is nicer weather and promise for approaching the completion of the trip. Oh well, but we stayed at the hostal in town and loitered around the city for a few days enjoying the feeling of having less than 1000 miles left to hike AND as arbitrary as being in a new state is, we were DONE with california. Happy to have moved on we took 4 zeros (why not?!). The delerium of walking all day every day was wearing down on us. We went for the last 3 days to 'central point' where we stayed at a friends house with TV, computers, netflix, dogs, grocery stores and everything a thru hiker could dream about. It was awesome, but every day off the trail makes getting back on more difficult. Finally after all that time we got back on and hiked in 10 miles to the first water and campsite where we camped with cerveza and queso who already had a campfire going. It was good to be sleeping under the stars again.

Getting back into the Rhythm was difficult, no....impossible. There is something to be said for completeing a thru hike as a purist, and to those who can do that I congratualate them. It is an insanely difficult prospect due to the mentally grueling nature of just getting up and walking every day. Physically, its not difficult at all, but putting your head down and hiking 30 to 40 miles a day (as we had been) makes it all but impossible to actually appreciate the wilderness how I would prefer to do so. It became insane as we passed spot after spot where I could spend a whole day just staring into the distance, but feeling like I 'couldn't' stop at any of them. This isn't how the wilderness should be enjoyed!!! I was a hiking robot. Anyways, we decided that southern oregon's brown desert-y hills were too much and skipped ahead to crater lake where we had packages. This would buy us some time. Here we met up with some awesome locals (from portlandia) with whom we spent the day traveling around and decided to go to the Umpqua Hot Springs after spending the day in the park. We went to the hot springs and enjoyed a good soak, a campfire and the company of a skitzophrenic kid who called himself DJ I am One-one-one-one-one six-six-six-six sounds liek sick-sick-sick-sick........ he told us about all of the 'energy lines' and other mysterious things that we should maybe be in tune with in the area and for this invaluable information we gave him some food and hung out for a little. These hot springs are amazing though, carved into the rock and overlooking the umpqua river, they are by far the most awesome hot springs that i've ever been to.