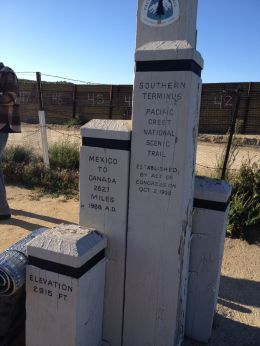 Beavercheeks, 2 bagels and I slept in a trailer in Scout & Frodo's driveway. As Yogi's book says, the Mann's operation is run with "corporate efficiency"- we were told that breakfast would be at 5 and shuttles at 6. Tristan knocked on the trailer door a few minutes before 5:00 and said "It's a beautiful day to walk 2,600 miles."

Getting up wasn't hard after waiting to start for so many months. I drank coffee and ate some fruit for breakfast, but giddiness ruined most of my appetite.

We rode out to the border and took turns getting our pictures taken with he monument. Beavercheeks, moss, 2 bagels and I took one where each of us sat on a column. Moss put her ass over my head in the second picture, which made Boomer try to dub me "assface." Luckily it wasn't catchy enough.

Walking to the trail from the monument was really exciting, especially because we were in the desert surrounded by unfamiliar, Dr.. Seuss-looking plants. As I think I've mentioned, for at least the first third of the AT I felt like I was in my backyard. The landscape was familiar.
Southern California is much different from anything in the southeast. I have to say though, that it was much greener than I expected. When the uninitiated hiker thinks of a desert, the minds eye sees the something like the Sahara.

The first 8 miles or so were amazing--the trail seemed to be covered with flowering plants and I was filled with energy from the newness and magic of starting the hike.

But this didn't last long--I guess one forgets what it's like to hike for hours. I think it was around mile 8 that Moss and I, in a desperate search for shade that soon became routine, lay down in the first shady spot we found. That it was in the trail wasn't going to stop us. It was around 11 and very hot.
It was then that we started some good natured complaining (which through hikers become very good at quickly). Laughing about the ridiculousness of
acting so miserable on the first day, Moss wondered out loud "why do we do this?". "So we don't have to get jobs" was my (half joking) answer.

We hiked on after eating the whole chunk of Gouda I bought in San Diego. At a jeep road on the descent to Hauser Creek there is a sign warning Mexican immigrants of the dangers of traveling in the desert. Part of it read "no vale la Pena!", which became our mantra for anytime things got hard or uncomfortable ("it's not worth the pain").