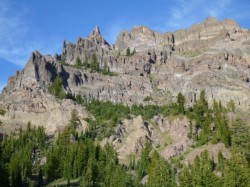 Ben had to be at work early again the next day (July 10), but he brought me up to the Summit ranger station which was the best prospect for catching a ride up the hill. I got there at 6:15 and by 8:30 found some off-duty trail crew workers headed up rock climbing who gave me a ride. Time moves differently on the trail and the wait was much less vexing than it would have been for me in normal life.

The wildflowers above Sonora Pass were again exceptionally beautiful. Red paintbrush, blue lupine, and a white many-branching flower were dense along the creeks, creating a celebratory Fourth of July effect. There was lots of large blue showy penstamon and smaller blue mountain penstamon resembling Shreks ears. I learned to recognize many other flower whose names I didnt know; I now believe that they include Mules Ear, with a giant green leaf and a sunflower-like flower; scarlet gilla, with a brilliant red or pink five-part flower resembling a firecracker; and perhaps asters, with a yellow center and many pink petals. I took lots of pictures and am looking forward to slowly improving my understanding of wildflowers.

Unfortunately, my foot started going numb again. Morale dipped to a new low and I called it quits after 13 miles. I found a pleasant sandy area out of sight of the trail and enjoyed it much more than most established campsites. The black ants were after me at dinner.

The second day was also pretty, leading to Ebbetts Pass. I was still plodding, but the foot didnt hurt and I made 23 miles. It was particularly hot that afternoon and I sweated hard and developed a heat rash on my lower back, forcing me to carry my pack on my front for a while until the evening cooled and I began to recover. I crossed the pass and reached the base of Ebbetts Peak, an impressive volcanic tower with a formidable-looking face. Something called to me and I set out to climb it by the last light of the day. I managed to locate a crumbling 3rd class route up the face with airy drops but big holds. I was extremely conscious of being out there by myself with a very low likelihood of getting help for several days if I fell. It stirred me out of the plod and focused me intensely. The view from the summit was beautiful and I found a talus slope on the far side with an easy descent, then walked back round the peak to make a camp on sandy slabs at the base. At first it looked bug-free so I didnt set up the tent, but soon the big black ants came to visit and got into my maps and then my food and my sleeping bag and my hair, driving me crazy. I got up and set up the tent and after a bit of work eventually had an ant-free night of sleep.

Climbing Ebbetts Peak restored my mojo. I realized that I hadnt been pushing myself for fear of injury, and that without the push, the hike turns into a plod that is not fun and wont get me to Canada in time. On the third morning, I stretched, took two Vitamin-I pills, and set out at a brisk pace to go as far as I could. This was the most beautiful day since the High Sierra, curving through wildly-sculpted, multihued volcanic spires and exceptional wildflowers. My left ankle bone began hurting severely where it rubbed against my shoe, in the same place that it felt funny in the shoe store. I dont know why it just resurfaced then, and was unable to fix it by changing socks or adjusting the laces. Finally, I took my knife to the 8-day-old $ 110 shoes and sliced away the side in proximity to the ankle bone, fixing the problem for a while. The tral then led to a lake basin, where I took a swim at lunch in Lily Pad Lake. The ankle bone began hurting again, as if bruised, but two more tablets of Vitamin I solved the problem. In the afternoon, I got back onto the Sierra Crest and took a side trip to The Nipple, a perky volcanic formation with panoramic views. From there, the Lost Lakes were spectacular. The day became overcast for the first time since Silverwood Lake. I crossed the divide and made dinner below Elephant Back, then climbed around it and reached Frog Lake for a wonderful sunset. I dropped down to Carson Pass by complete dark. Campsites had been poor for many miles and several hikers were setting up their tents on the deck of the visitor Information Center beside the highway. I was still feeling good, so I pushed on by waning headlamp light for about two more miles before finding a nice campsite in the forest beside the headwaters of the Truckee River at 11 pm. The day covered 30 miles of the PCT, and logged 33 miles on my GPS including a few small diversions and the measurement noise of the device. This is the longest day Ive hiked in my life, and I was carrying an overnight pack the whole way. At the end of the day I felt better than the beginning, and could have gone even further if I hadnt wanted to see the next bit of country in daylight. It was a big psychological boost.

On the fourth day, I wandered up the last 13 miles, crossing Highway 50 and dropping to the resort and post office at Echo Lake. My bounce box had arrived, but my resupply box was not there. It had gone out by surface mail less than 10 days prior because it had a fuel canister and there was no telling how much longer it would take to arrive. I cobbled together fuel from a section hiker who had finished the trail, some food from my bounce box and left over from this section, and found I had enough to last the next three days through the Desolation Wilderness to Donner Pass. I got a ride to the edge of Lake Tahoe, and Dave Usher picked me up and brought me back to his cabin.

I called Jenn and she was feeling my absence just as much as Ive been missing the family. I feel like Ive gotten from the Pacific Crest Trail much of the experience that I was hoping to have on this trip. Some of the key parts for me have included

living simply for an extended period with as few possessions as I can figure out how to bring
losing track of time on a trip with no end in sight
starting to develop a mental picture of time and place on a geological scale, with the crashing of the plates, the formation of the Sierra batholith, the rise and erosion of the Sierra, the volcanism overlaying the granite, and the glaciers sculpting the canyons, all illustrated by countless specific formations along the way
making a deeper acquaintance with the plants
developing humility about the limitations of my mind and no-longer-20 body, yet restoring confidence that I could continue to perform when needed

Im ready to get off the trail now and look forward to continuing with sections at a later point.