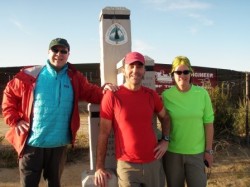 Amazingly generous Trail Angel (TA) Scout drove Sandy (Coyote), Andy (Wolverine), and me from San Diego out into the pre-dawn desert. Specifically, we drove to the Southern Terminus of the Pacific Crest Trail near Campo, California. Since this location is right on the US/Mexican border, the most prominent backdrop for this spiritually ennobled spot is the 20 foot high metal fence stretching endlessly in either direction. We took pictures, signed into the guestbook, turned around 180 degrees and headed North.

My two fellow-hikers, Andy and Sandy, and I had just met the day before. We started with high hopes. It is important on this first day to get as far from the border as possible, to avoid potential conflict between the Border Patrol and those they wish to apprehend. Further, the first reliable water source is 20 miles away at Lake Morena. As you can well imagine, 20 miles loaded down with 45 pounds of gear, food and water is not trivial. Andy and Sandy would get well ahead of me while I dawdled, taking pictures of rocks, plants, and vistas.

Eventually, in late afternoon, we were resting near Hauser Creek, and Andy decided to make the push for Lake Morena. Sandy followed soon after and then I began the slog up 1600' of ascent after 16 miles of hiking. I made the mistake of not changing from my my sunglasses to my regular glasses as I grunted up the hill. Night fell as I crept across the last few miles and I was too tired to put down my pack and change glasses so that I could see. Eventually, I took my sunglasses off and hiked into camp virtually blind. Fortunately, Andy saw me and hailed me over to his campsite.

It was cold that night in Lake Morena. I called the Manns (Frodo and Scout) to let them know that their three charges had all made it safely to their destination. Andy had mistakenly paid $ 19 for the campsite (the backpacker rate is $ 5) and they refused to refund his money. So Sandy and I were squatters on his turf and we each gave him the $ 5. We met two other thruhikers that we had overlapped with several times that day, young people from Long Island staying at the same site. I named the guy "Gatsby" and the girl "Zelda". I don't know if the names will stick, but they were cute. I was the only one with cell reception so several hikers used my phone to call home.

Life is great! This was the inaugural event for my Big Agnes tent, my Z-rest, Big Ages blowup mattress and sleeping bag combo. Andy commented that he had successfully used a Big Ages tent for most of the Appalachian Trail (AT) last year. So I got in bed and slept great.