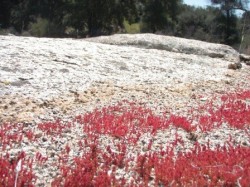 The next morning I said goodbye to Andy and Sandy. I needed some extra time to recuperate from the previous day's exertions and I wanted to hike by myself without freighting others with the irritations of my slower pace. I gave Andy my Redmond address as a place where he could ship things from the trail. The New York couple left about the same time. I packed very leisurely and watched a couple of guys about my age get ahead of me on the trail.

I left Lake Morena with a carefree spirit. I will be returning to this spot for the ADZPCTKO (Annual Day Zero PCT Kick Off) in late April. Nancy will fly down to some airport in Southern California, find me on the trail, and we will drive back to Lake Morena. I hope this vague plan works - and I need to tell Nancy that Lake Morena gets cold at night.

While stomping along on a surprisingly hard climb out of Lake Morena I came upon the first hiker I had met going the opposite direction. In my hyper-focused mind I knew that everyone hiked the PCT going North (not true). I chatted with this fellow for awhile, enquired as to his plans, where he was from, his age, etc (you know me). I was particularly curious because he looked about my age (he is 68, I am 60) - the oldest people I had seen on the trail thus far. It gradually dawned on me that he was one of the guys I had seen start on the trail earlier than me that morning. He and his friend were from Oregon, had hiked much of the PCT in that state, and were down here "biting off more chunks". I naturally asked where was his partner. His friend had developed dizziness several miles down the trail and the gentleman with whom I was chatting was hastening the three miles back to Lake Morena to leave his gear so he could hike back to assist his companion. He said there was nothing I could do to help so we parted company. After hiking another half hour I came upon his friend walking unsteadily toward me. We chatted briefly and he also assured me there was nothing I could do to help. We went in opposite directions and I mused about the fragile nature of life.

I hiked on, down a mountain, over a road, across a creek and into an oak orchard. I was weary. I lay in the grass under these oak trees and felt timeless. Blissful

Soon, the need to finish the day drew me on and I began to look for a place to spend the night. I came upon Boulder Oaks Campground. The place was deserted. There was a campsite 30 feet from the trail. There was cellphone coverage. There were restrooms, there was a spigot with water - a big deal on the PCT. I resolved to spend the night. Everything was perfect. While talking with Nancy that night I told her of my good fortune. She later told me that she didn't have the heart to tell me the reason why I had stumbled upon such a fabulous but deserted site. Apparently, it was toad mating season in that area and Boulder Oaks was closed temporarily. In retribution for my trespass, that night the gods threw a violent storm at me. One of the stakes pulled out of the ground and the whole tent was thrashing around. I was spared to leave in a soggy state the next morning.