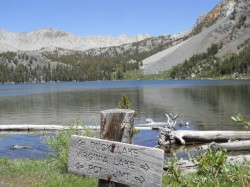 Today we busted out 19 miles and ended in a Motel Six in Mammoth.

The three of us were feeling a bunch better than yesterday and the miles
kind of flew by.

The trail up out of Tully Hole was actually nicely graded and mostly rock
free. What a delight after all the miles of rocks!

Virginia Lake is very nice and we had lunch there. At Purple Lake One Step
reminisced about her helicopter rescue there several years ago. She was
really sick, had a sattilite phone and used it.

Around Purple Lake quite a few downed trees have yet to be cut out but it
was pretty easy to get around them. Basically it called for cutting
switchbacks.

We got to the Duck Pass trail and headed up the hill toward Mammoth. It
was about a six hundred foot climb up past Duck Lake to the top. Duck Lake
was beautiful. The blues of the water were amazing.

At the top we dropped down a bit and turned on our phones....they worked.

I called Dona and checked in. Told her we planned to camp before the
trailhead and go into Mammoth in the morning as it was getting too late to
carch the shuttle bus to town. I also told her I would be coming home.

After I hung up I chatted with a day hiker. She said it was only three
miles to the road and she'd give us a ride to town.

The three miles was wrong. It took about 2.5 hours at top speed...it's
actually about six miles.

BUT, the ride to the door of the Motel Six was GREAT and the Garlic Chicken
and two bottles of Chardonnay wine at the Italian restaurant across the
street put a nice ending on what turned out to be our longest day of the
hike.

Life is a tale, told by an idiot, full of sound and fury, signifying nothing.
"Macbeth"