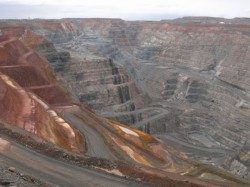 I continued westward by bus to Adelaide and from there by train across the sensationally monotonous Nullarbor Plain towards Perth. Surprisingly there was no sweltering heat but grey sky and rain instead; the train even got stopped in flood waters for a short period. While stuck they announced the train will terminate at Kalgoorlie for good due to a bushfire further west! It didn't matter for me as I had scheduled a stopover anyway to have a look at Kalgoorlie-Boulder's 500 m deep Super Pit gold mine.

In Perth I headed into the bush straight away and hiked south halfway down the Bibbulmun Track (a nice 1000 km hiking trail through Western Australia's great southwest, from Perth to Albany, www.bibbulmuntrack.org.au) as far as Donnelly River Village, which is close to my friends' farm down there and which took a bit more than 10 days. It was great to do a bit of hiking again as well as completing the entire trail, the southern half of which I had hiked 10 years ago.

Being finally back on the farm for the first time since then was definitively the best, though, and we sure did all kinds of great stuff despite everyone being quite busy!