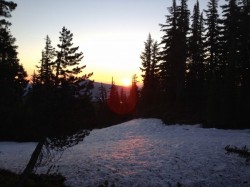 About Day 92 - Still in Oregon

The first few miles this morning were treacherous. All the snow that was soft yesterday evening had turned into a bumpy slick ice field.

As the morning grew so did the mosquitos and it made it a little bit harder to concentrate. Breakfast was a challenge; one scoop of granola with the left while swatting with the right and every other swipe would land a mosquito in my cereal, yuck. The cousins didn't even stop and eat, they made their cereal and ate on the go.

Shortly after breakfast and a couple miles before the road that leads you to Shelter Cove resort I met a young section hiker named All or Nothing, she was hiking with a older gal named Marmot. We said hello and talked about going in to Shelter Cove. We ended up getting there around the same time.

Shelter Cove seems to be a happening camping/fishing location though from what I gather it is expensive as well as up for sale. The store had our boxes and were real friendly. TW and I bought poppy seed muffins. The store had more than I thought it would have but nothing in the way of fresh fruits and veggies.

We sat out front at the picnic table going through our boxes. The hiker box had choke food and we made quite a meal and also had the elephant-ear-mushroom Joe and Naoko gave. It was quite tasty and wish I had more.

All or Nothing and Marmot were pleasant to chat with. Marmot gave me a foot rub with olive oil! Amazing.

Cheesewhiz went for a dip in the lake and shortly after so did TW. A short while after I went for an hour run that was supposed to be twenty minutes, some times you just feel good. I ran on a trail that climbed up to Whitefish lake it was further than I wanted my body to go today but was real sweet, it ran along this pretty rapid river after getting on the other side of the train tracks. When I got back I jumped in the lake and did some stretching and yoga.

Walking back to the general store I saw Focus! Coo surprise we chatted a bit and she invited us to stay with Wrong Way who rented a large cabin which was the only one available, it houses ten! Samwise and Sweet As (found out his name is Sweet As, as in sweet as honey, funny lanky-tall Aussie dude) came in shortly after. Chatted quite a bit and shortly before five pizza was on the menu, they were ordering from a place a few miles down the way, so the cousins and I ordered a large supreme and asked them to hold the cheese. When the pizza came we all headed to the large cabin, it truly was large. We had a good time chilling with the pizza and some of the guys had beer too. We rotated in the showers. When 8:30 came around I was pooped and lasted maybe fifteen more minutes before I hit the hay.

Wrong Way had hit his head quite badly, he is a slightly older fella that has an energy level that is quite high no matter which age group one is talking about. He has done the the CDT twice, the PCT a couple time and the AT too I believe. After he gets to Canada he is gonna bike down to Ashland and run the Palms to Pines 100, at least this is his plan. Wow. So cool. Anyway so hope he is feeling better tomorrow.