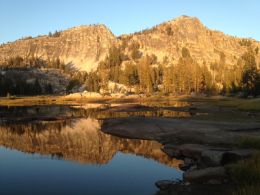 I didn't stay long in Echo Lake. I planned to stuff my gullet there but when I couldn't charge my phone at the store I got ticked and walkked back to Cambell? CG just south of town to charge phone. I slept in one of their tent cabins the night before. I hiked out about 10 miles that day and made camp. I made a unplanned stop in Kennedy Meadows/ Sonora Pass to get a burger. A hunter at the trailhead gave me a lift to the resort. Once there I stuffed face on a burger and fries. I made it a quick stop and hitched out that afternoon. Hiked in a mile from TH and camped near water on trail. That night was the coldest night I spent on trail. The wind really picked up had to be a steady 35 mhp. I froze my asss off hiking till I got off the pass 4 hrs. Later. On my way to Tuolumne I passed a fire near Dorthy Lake. I stopped to get water and noticed some smoke coming from behind a crest of stone. The cloud got huge so I shouted out. No answer. I marched over the little hill to find a 60 ft. Area burning. I stomped on the fires edges and dump a quart of water on it. That was futile. So I I booked ass to higher ground to see of I could get a phone signal no dice. There was nothing I could do. So I continued down trail. As far as I know the fire luckily burnt itself out. I made it to Tuolumne at 4 pm after a 27 mile day to find the grill closed due to power outage. Another missed burger. I hitched down to the valley. And here's where my trip ended. My "thru- hike" turned out to be nothing like I had planned. Northbound turned southbound, injuries, fire detours, more hitching than I cared for, but all in all an awesome time. When I get the chance I'll make a more detailed post.