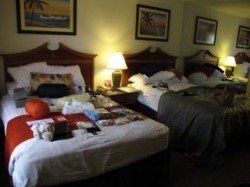 Fashionably late to my own journal

So, I'm sitting in a motel room in San Diego, going through the mental list (for about the millionth time) of all the gear I've assembled in the last couple months, when it occurs to me that I never managed to acquire a journal. Normally in these circumstances, I'd be out there with my fountain pen and a notebook, but my brain isn't ok letting me carry extra weight that doesn't serve more than one purpose on the trail -- my brain has gotten downright tyrannical about that sort of thing in recent weeks.

I want a way to record my time on the Pacific Crest Trail, and it's been indicated to me by a few people, mostly my mom (Hi, Mom!) that they'd like to share that, if possible. So here's my last-minute attempt at putting together an online journal.

I've got a few months before starting med school in August, and I've always wanted to go on an extended wander, to go out and just get lost for a few months.

The Pacific Crest Trail extends from the Mexican border to Canada for a grand total of 2,650 miles. Sounds like a pretty good opportunity for a wander, no?

So, with the three months left before heading off to med school (location to be determined) I'm heading out, and plan on walking as far as my feet will take me before July 15th, which I've set as an arbitrary deadline by which I must be off the trail to get ready to go to school. In that time, I may walk from the Southern terminus of the PCT to as far as Oregon, but more important to me than how far I get is the quality of time that I spend on the trail. Wherever I am in three months, that's my stopping point, hopefully to be continued in a few years so I can complete the trail.

And I start tomorrow.

As you can probably tell, this online journal thing is happening on the fly, and I have no idea what kinks there may be in the system moving forward. I'll attempt to update it from the trail, but if it seems like a lost cause or, let's face it, too much work (because I'm lazy) I'll probably let this thing go quietly.