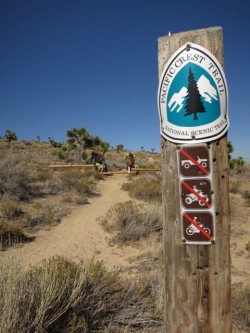 I never really had a clear idea of what the trail would be before I came out here, partly because I'd never heard of the PCT before January of this year. Coming out here on a whim kind of meant that I couldn't build it up to be anything in particular in advance. I say that only because there's no way that I could have anticipated what the trail would be like, even if I'd spent years preparing.

I've cursed the cold and the heat, sometimes in the same day. I've cursed the wind and the lack thereof. I've cursed the trail for pointless switchbacks, and myself for taking the wrong trail yet again. I've cursed the mosquitos, because they really are just the worst species on the planet. I've dealt with intense pain and intense boredom, and I'm still not sure which is worse. In some remote way, I knew that the trail would be difficult. I couldn't have anticipated how it would challenge me, and how I would come to love some of those challenges. I never thought I'd start to like going uphill, of all things, just for the feeling of getting up the hill without giving in and stopping. When did I start to like climbing hills? That's ridiculous. I never anticipated the satisfaction of getting my pack put together just right. I think anyone on trail can attest to the fact that your pack just packs well some days, and it's always way more gratifying than it has any right to be. That's my point, I guess. There are too many things that you'd never think about before you got on trail for me to ever go through them all. They take you by surprise.

The one thing that I thought the PCT might be that it never has been, for me at least, is lonely. I know that the only reason I got as far as I did, and the reason that it's so hard to leave, is the people I've met out here. It's been said endlessly, but the hiker community really is one of the best places to find yourself if you can manage it. I've met some of the most amazing people, had the most fun with them, and seen some of the most wonderful things from them. Those are the things that stick with you, because, at the end of the day, hiking is just hiking. Pounce's laugh that you can hear from half a mile away. Pop Star's laugh, that you can probably hear from Canada. Carpenter mooning you, Carpenter sneaking up behind you, Carpenter running up a mountain for the sake of an injured hiker. Creeper, who will be completely silent until she gets off a line that sends everyone into hysterics. Blackbeard struggling with the movie game to keep me distracted from shin splints. Destroyer, who really is one of the sweetest people ever, laying waste to the world of ants. Faceplant hanging back for absolutely everyone to make sure they're ok. And on, and on, and on. And those are only the people that I hiked with for a good long stretch of trail. Doesn't even mention Ipod giving me a Mountain House on Sonora Pass, or Dancing Feet sharing her coffee after Selden Pass. And even that doesn't touch the number of hikers you meet in passing that you wish you got to know better. Or the trail angels who make the entire thing worth doing, especially early on when you're wondering what on earth you've gotten yourself into. Or the people who have never even heard of the PCT willing to pick up a truly rank hitchhiker by the side of the road. I can keep going, believe me, but there are too many things that I'll take away from the trail that deserve mentioning. And I've probably carried on enough here anyway.

This experience has been lightning in a bottle, and I'm not ready for it to be over, but I don't know that I ever could be. My takeaway from all this is that if you ever find yourself with the opportunity to be hiker trash for a while, take it. You won't regret it.