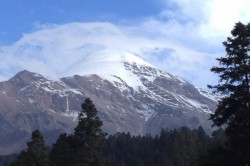 I went for a hike with Action on Sunday which reminded me that I forgot to update this space. So here's the cliffnotes version of the last four months:

I hung out in Seattle for a few days with my family and grandparents before taking the train home with my Mom. We crossed the PCT at least once, near Mt. Shasta. The train was pretty much 36 hours of sitting in a massage chair with nothing to do but read books and think about how fast we were going while looking out the window. For the most part, we were on the other side of the mountains from The Trail, which was pretty cool.

The other big thing I have done since I got back was El Pico de Orizaba (Citlaltepetl) about four hours south east of Mexico City. Orizaba is the largest volcano in Mexico and the second largest in the world (behind Kilimanjaro). I was imersed in the culture and I'm pretty sure that I was the only native english speaker in the town of Tlachichuca, where I stayed before and after the climb. The fact that the only other climbers on the glacier with me spoke German and only a little bit of english, and that I speak no german made for an interesting day. Walking at 18,500 feet is way more difficult than I would have thought but I managed to pull myself up to the top. The trip down to Mexico (and my trip with my family to Costa Rica over New Years) has sparked a new idea for what I will be doing next summer, so stay tuned to this space for updates on where I will be journaling for my Round-the-World trip next summer!

I am hoping that I will be able to get for myself a "Round-the-World" ticket from a airline group. The ticket would give me up to 15 stops, in one general direction (East or West). I hope to use my stops to explore the six habitated continents (getting a flight down to Antarctica is surprisingly difficult, but I might still try to get down there!).

In the meantime I have unfortunatly arrived at the phase of my life that I call "Get a job, Hippy!".