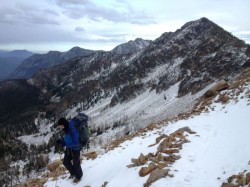 In the morning we had breakfast and then made one last trip to the outfitter before starting our hitch back to the pass. We split into two groups once again and Typo & ED immediately got a ride. Scallywag and I spent a while intown trying for a ride when a local advised us to walk up to the ball field - less local only traffic there. We stood with our thumbs out for a while before a black car stopped to offer a ride. It was a thru hiker I hadn't met before named "Waldo", he was waiting in Winthrop for some winter gear to arrive after he retreated from Hart's Pass in a storm. He said he was happy to take us up to the pass. While we were standing there, a van pulled up and it contained Dancing Feet, Not So Bad, City Food, ScrubRat and Doe Eyes! They had quite an adventure getting to Rainy Pass and had also retreated after reaching Cutthroat Pass. They told us there had been two foot drifts and when they reached the pass they all agreed to turn back and get some more appropriate gear for the conditions. As we were having our roadside reunion a Sprinter van that had passed by earlier had turned around and come back to offer us a ride! Amazing.

We got in with Waldo and soon we were at the pass. It was very cloudy but at least it wasn't raining or snowing. We found ED and Typo waiting for us. We asked Waldo to drop some food off at Hart's Pass since he was headed up there tomorrow and he agreed and bid us goodbye. I was still feeling queasy along with Typo - I suspect the water from the pond next to Highway 20 didn't do us any favors. Just before we headed up the trail, I vomited into the snow. We got our packs on and began the journey up to Cutthroat Pass.

We could still see the outlines of Wolverine's tracks - it had been a relatively warm day and the footsteps had melted out a bit. We saw a campsite and wondered if he had camped there last night. The trail begins a series of switchbacks up a pretty open mountainside, as we climbed the snow was beginning to be more consistent. Near the top of the pass we lost the trail briefly until we reached the top and a trail junction sign. We found the spot where the others had turned back, the snow had melted quite a bit and we decided to go on. We would be above treeline here for several miles before dropping thousands of feet down into a deep valley where we would be relatively sheltered. I felt sick again and vomited up the water I just tried to drink. Great...

I took the lead, breaking trail as we passed along a long traverse beneath towering peaks to our left. In places where the snow had drifted I was extra careful to keep far away from the right edge of the trail. The snow was very wet and it was easy to slip wearing trail runners, with rain pants on a slip in the wrong spot could result in a very long slide into some rocks or worse. I tried to kick solid, incut steps into the trail to make a good path for the others. The clouds were thickening and the sky got very dark and soon it began to rain - just a light drizzle at first but then it built into a steady sheet of water. The trail slowly became a trough filled with icy cold slush as we pressed on toward the next pass as darkness neared. We reached a campsite but chose to press on instead, aiming for the low point of the valley to camp. We got out our headlamps and hiked silently into the night, finally stopping at the Methrow River to camp for the night. It was a solid rain as we setup our nice dry tents, which of course were thoroughly soaked during the brief moments needed to set them up. Poor Typo was in his tent and warm and dry in his sleeping bag when he realized that he had setup in a puddle and was forced to get up and move his tent in the pouring rain. I had a decent spot and got in my bag and had a cold dinner. I couldn't believe once again we got dried out only to be soaked within an hour or two of returning to the trail. We'll see what tomorrow brings.