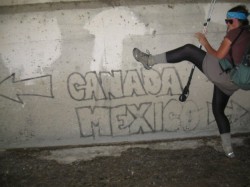 No way! I love this one. Ok, I still haven't done the AT or CDT, but they will always be there, right? Shortly after finishing our PCT hike in 2010 there was talk of CDT-ness, naturally. Actually, it was more like I became obsessed with hiking again because regular life seemed so dull. I couldn't stop looking at CDT photos and journals, and imagining myself out on the divide. Croatian was less than amused because we had literally just gotten off the trail, out of the rain and hardship. He had seemingly moved on. That is until our good friend Joker suggested that we do the PCT again (a third time and because he was doing it again) because he had been on the CDT and thought, hands down, that the overall experience of the PCT was better. I fought and kicked and cried but Croatian would not budge. How absurd, I thought, to consider the same trail a third time when there are other trails to walk, and especially so because he had walked the PCT in '08,'09,and '10, and me '09 and '10. Good Lord!

Finally over breakfast one morning, I came to the realization that I definitely wanted to hike the PCT again, and started to cry. I can't exactly pinpoint why I was crying, I mean, I wasn't sad. Both years on the PCT were glorious! I think I wept because there was something to look forward to, my life had all of a sudden become dull. For the first time since I was 16, I didn't live in the mountains and worked 5 or more days a week in the food industry. Have you ever worked in the food industry? I became scum of the earth to some people. I can't wait to be out on the trail again to reminisce about those times when people were rude and think how lucky I am to be out in the wilderness away from it all.

And so welcome to my journal!

Last season I started one on trailjournals.com but I didn't keep up with it. I wish I had though because a lot of great things and not so great things happened. Of course, the pleasure outweighed the pain.

I think initially I will talk about how this is all still a learning process for me.
Until then, I have to focus on the present and go to work!