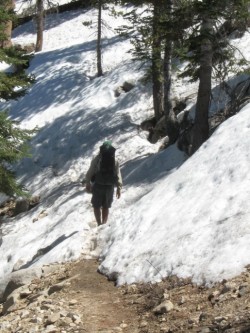 Snow scares the pants off PCT hikers, the vortex of fear begins before Fuller Ridge. Don't let the fear grab hold of you, anyone can get through snowy sections with a reasonable attitude and/or the right gear.

In 2010, Cro and I underestimated the snow levels on Fuller Ridge, we were definitely too confident. We thought that the vortex of fear created for that particular year was the same created for other previous years. We were 10 miles from Black Mountain Road when we hit complete snow coverage. When we couldn't traverse a section in the trees because it was too icy, defeat swept over me. Would we have to turn back? But we had come this far! Croatian tried picking steps with my trekking poles but the snow was too hard. I imagined losing my footing and smacking into one of the trees. We made a decision to wait for the snow to soften, but how long would that take? Then out popped a fellow hiker donned in microspikes, surefootedly traversing the icy slope. He helped us by whacking some steps with his ice ax. Nice guy!

Eventually we made it out of the trees to softer snow, but the agony continued. I watched in envy as the fellow hiker practically floated above the snow; he was really enjoying himself. I, on the other hand, struggled to make every step count, feeling like at any moment I could slip and slide far far away. These thoughts made my body exhausted, I was so tense. These were the longest 10 miles of my life. It was a humbling experience for me.

But it had to happen because the "worst" was yet to come.