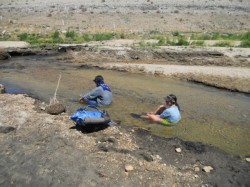 The first photo was taken by Moonshine after the Deep Creek hot springs. Cro and I got into the habit of jumping into water sources with our clothes on. But that's highly taboo!!!!


The second photo was taken just after resupplying in Wrightwood. Several of us decided to spend the night a mile north of the road at a picnic area. We packed out copious amounts of booze and cigarettes. Look at Jr. Sr's (left) hip belt, it is above his belly button! And he's wearing black jeans and a cotton t-shirt. He hiked from the border to The Anderson's dressed like that!

The third photo was taken at the Anderson's, 'nough said.

The fourth photo was taken near Timothy Lake. The night before Viper yogi-ed this watermelon from some nearby campers and I ate it all myself.

The last photo was taken at the Old Motel and bar in Sierra City on the 4th of July. Notice that Analog's dollar says that he loves Olive. Olive worked at VVR this summer and there was a rumor spread that they hooked up. If you've ever met Olive you'd know why that was funny.