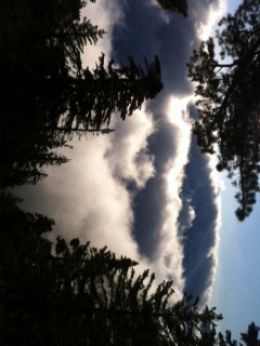 clouds before they envelope the trail

What an epic day! I woke early and began the summit of Mt. Baden Powell, and as the day sun came up, I noticed that everywhere below me was blanketed in clouds/fog. What a spectacular sights! I kept stopping to watch the clouds swirl below me.
At one point I took a wrong turn, and ended up doing 2 extra miles off the PCT (my longest detour to date). As I was on my way back, a day hiker in a fleece and beanie warned me that it was very cold up where he had come. As I was backtracking to the trail, I had just been through where he was talking about, and when I went through, it wasn't that cold. Clearly the weather had taken a turn, and I soon stopped to get on warmer clothing and rain gear (it had also started to rain). As I shivered into my warmer clothing I thought that this is how hikers get hypothermia.
As soon as I finished changing, up come Shutterburst and Gator, and we decide to hike together considering the turn in the weather. We made it to little jimmy spring, and filled up on water, ate, and then pondered our next move. The fog was getting intense, and my thermometer said it was 30 degrees out of the 60 mph wind...it was getting colder!
We decided to do a shorter detour around a section closed for an endangered frog, but the detour entailed a 2+ mile road walk. With the dense fog coming in and a windy 2 lane mountain road, a road walk was looking more and more like a death sentence. We still had some time before we had to go on the road, so we continued on. We got to a point where the trail crossed the road and attempted to get a ride from some cars in the lot.. No luck!
At this point we were chilled to the bone, and stopped at a picnic area to warm up. I suggested we start a fire in my wood stove, which turned out to be a life saver! It was perfect to keep the fire contained, while allowing us to warm our hands. While we were warming ourselves by our mini hobo fire, a car pulled into the lot. Shutterburst asked for a ride, and he said that he needed to pick up his friends who were freezing on the summit. He left, but then returned about an hour later with some tequila and food for the three of us. We talked and warmed ourselves as we had decided that we would camp there tonight and hope that the fog was lifted in the morning. We made a feast with the extra food, and played cards until we crashed.