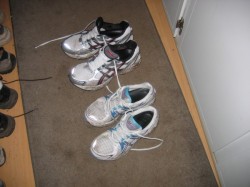 Well, our feet will be our most important thing to take care of. So, off to the podiatrist we went. Moira's orthotics were old and falling apart. So after checking out her feet the doctor used plaster of paris to get molds of her feet and she had new orthotics made. Then he checked me out. Since I've never had orthotics he added padding to the proper locations of my feet, taped them up and told me to try them for a few days. They worked well, so I went back and we decided to get orthotics for me too. Again, plaster of paris molds, and then he padded up my shoe insoles to emulate the orthotics while I waited for them. Got them the other day. Of course we then needed new, good, and proper shoes. An outdoor shoe store in Nanaimo was recommended. They really know their stuff. Analyzed our feet, watched us walk, then brought out different shoes. Eventually we made our selections. Moira bought 2 pairs, one size 8.5 and the other size 9. The first pair is half a size larger than her normal, because our feet will swell on the trail. Same reason for the size 9er which will be mailed to ourselves at the halfway point of the hike since a single pair will be pretty raggedy by then. I usually buy size 8 shoes, but for this I am starting with a size 9; 4E width and will mail in a size 9.5 for the second half.

We have checklists for everything. Bought a new, great light stove, about a pound including the pot and the fuel cannister. We each got new raincoats, weighing less than half a pound. Moira's new thermarest is half a pound. I'm taking her old one, at about 3/4 or a pound. We have had, for some time, lightweight packs, empty weight about 3.5 pounds and our 6 year old 2-person tent weighs 4.5 pounds, but we split this weight between us. Everything light weight. Moira hopes to hike with 28 - 30 pounds including food, but more with water. I hope to be at 30 -35 pounds. A litre of water weighs 2.5 pounds, so there will be times when I will be carrying 3 - 4 litres when the distance between water in the desert is 20 - 40 miles. 4 litres adds 10 pounds.

The first photo shows our shoes, the second shows our food (everything except the canned goods) and the other photos show our spare room with everything gathered together and checked off.

Journal Updates From You & Him