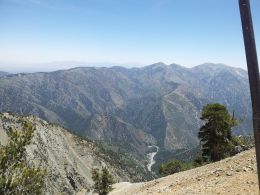 from the top of Baden Powell

Because Tmobile sucks in California its hard to keep this journal updated.

I think the last post left off at Warner Springs. Warner Springs was a
ghost town with a community center opened for the hikers. Whoever said it
doesn't rain in southern California lied. It rained off and on the entire I
was there. after spending a wet night there and a morning, I decided to
make a run for it and try to get miles in between rain. Not many people
left that day and probably for good reason. None the less I hiked out
leaving everyone I knew on the trail behind. After 6 miles I was soaked
through and really cold. I decided to camp early while I still had some
semi dry clothes in my pack. I ended up sitting in my tent from 4 pm to 6
am, but I was fairly dry and warm.

That morning I was aimimg to get to a trail angels house 12 miles away who
offered clean water per the water report. I planned to beg the the
homeowner to use their dryer and hang out on their porch and dry out. My
ultimate goal was to hike 36 miles to Idyllwild. When I got to Mike's
house and was surprised to find dozens of hikers who had the same idea I
did. The garage was full of soaking wet hikers and their gear. The people
living at the house had made pancakes which were still warm when I
arrived. After settling in and eating, the rain picked up and continued
the rest of the day, so I didn't hike anymore. A side note about this
house: this was the weirdest pkace I have ever been jn my life. I refer to
it as the Manson Family house. The place is in the middle of nowhere with
no public electric. Apparently it was a party house in the 70's. The
owner doesn't live there. The house was just there for hikers and to store
old radios. The people who work there were hikers who just decided stop
hiking. They received mesls and cigarettes for their chores. They didn't
say much to us. The lady of the house was plain clothed and didn't say a
word has she brought food into the garage. I wanted to ask if she had been
kidnapped jk. The services offered at the house were much appreciated by
all, but it was weird too.

At the house I ran into Collin and Jorge who I originally met in Warner
Springs. They were crazy and left during the peak of the night and had a
hypothermic night. I mentioned that I wanted to do the 25 miles to
Idyllwild the next day and get a hotel. It was a crazy plan, but they
wanted to do the same. We got up at 4 am put on wet clothes and started
hiking. We completed the 25 miles by about 1:30 pm. That hike ended at a
highway were the was a cafe. We had burgers there and then hitched into
idyllwild. We got a room at the Applw Blossom inn, which I highly
recommend for hikers for the price. We stayed in iddyllwild for 2 days,
eating out and resupplying.

We left idyllwild via the Devils Slide Trail, which was a near vertical 2.5
mile climb to my first real mountain, San Jacinto. This was my first time
at altitude. The breathing was hard and the lack of oxygen gave me a
mountain high. We camoed in a pine forest were Collin decided to share
stories of suspicious disappearances of people in national parks that he
had read in a book before coming on the hike. I guess the author narrowed
it down to a park ranger serial killer or sasquatch. That was not my best
nights sleep ever.
The next day we hiked through San Jacinto and over the famous Fuller Ridge,
which I thought was just ok. the next section of the hike is what I refer
to as the descent into hell.