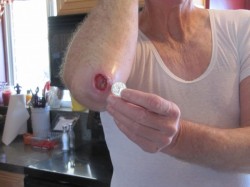 The elbow wound that took 4 months to heal.

The PCT journey was to have begun in 2012

My PCT hiking adventure was to have begun in 2012. My gear was purchased, the resupply boxes were packed and ready for shipment and I had extensive training under my belt; however in early February 2012, a fall from a ladder, wherein I landed hard on the concrete driveway, injuring my elbow, put an end to my hopes for a thru hike for that year. I had been repairing a leaking roof and was descending the ladder, when the legs of the ladder slipped out from underneath me causing me to drop 10’ to the concrete. I cracked five vertebrae in my back and sustained a nasty wound to my right elbow that took four months to heal – see photo.

As spring turned to summer, I determined to do a section hike through the Sierra’s, so that I would be familiar with the area when I resumed the hiking journey in 2013. In early August 2012, my wife drove me to Kennedy Meadows, a community of approximately 200 residents, spread over a wide sagebrush covered area at the base of the Sierras. I said my goodby’s , shouldered my 40 lb. pack containing my bear vault with 10 days of food and headed up the trail. The further I pushed into the wilderness, the greater was the pushback not to continue going forward. I have learned to heed these warnings, so not knowing the reasons why I should not continue, I returned to Kennedy Meadows, and called my wife who returned to pick me up. The trip, in earnest, will have to wait until next year.

The Pacific Crest Trail (PCT) is a 2,650-mile national scenic trail that runs from Mexico to Canada through California, Oregon and Washington. The PCT traverses 24 national forests, 37 wilderness areas and 7 national parks. The PCT passes through 6 out of 7 of North Americas ecozones.

If you are prepared, you need not fear.