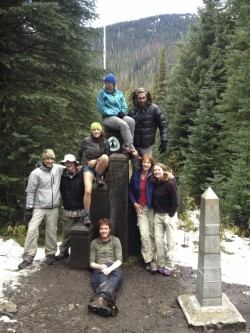 The end of the hike

My last day on the trail. Cuddles, Toots and I left early for the monument. We were happy and surprised to meet Chozen 1. He had hiked from Harts Pass with snow shoes, really hardcore. He had camped at the monument waiting for his friend to bring him supplies and take pictures. He was tired but in good shape. His arrival bodes well for the others we knew who were coming in behind him.
We took pictures at the monument then Scout/Raftiki showed up then Lighthouse then Chozen 1's friend then Running Commentary and Haggis then Nightcrawler's dad. We had quite a large contingent after all these people showed up. Everyone but Chozen 1 had come up from Manning Park.
After the celebrations and good byes, I got a ride to Seattle from Toots and Aloha, they were also dropping Cuddles off to his car who had left with friends.