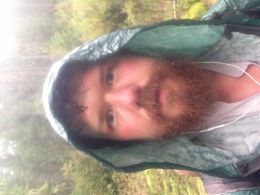 I am in Stehekin. I have my passport. I am zeroing today. I did not plan on this. I spent the night here last night to get my passport today. Then there was a mudslide that covered the road. I decided to stay another night. Somehow I deleted my satellite device app and my journal app. Mildly irritated. Want to use profanities. I'm very bored here. I want to finish. I'll be damned if I know what I'll do after that, but whatever. Hopefully the weather isn't shit tomorrow but even if it is I plan on doing at least 20 miles. Maybe 25. That would give me more buffer. I have no cell service or wifi here. Trying to coordinate is difficult. This place might be nice for overstimulated business people, but I just want a damn Internet connection. On a less bitchy note, the lake is gorgeous and the bakery has very good food. I'm going to grab a cinnamon roll for each of the next three days. Also I'm going to try to be happier about being in a bed on a gorgeous lake in the mountains. I don't even know if this will upload to my journal! SHIT! So no more entries until I'm done and have my laptop. That should be Tuesday.

I also think I'm dealing with a couple of things that I haven't thought about for a long time. This has been good for me, but now is the time where I get to see how this new and mostly healed persona handles the stupid and terrible shit that defined a large part of my life. Being in the army and going to Iraq where people tried to kill me did bad things to my worldview. I was a happy and quiet guy who based his life on some pretty pacifist-type beliefs, and while I retained the ability to call up some very aggressive and violent parts of my behavioral repertoire, they were not things I used on anything like a regular basis. Then in the army, I met a lot of stupid and violent people, who liked to play idiotic hierarchy games, and the egalitarian part of me had to be set aside in favor of the "If you fuck with me I'll beat the shit out of you" part of me. I had to cultivate this mindset and keep it at the ready at all times to defend against the ever present bullshit that these people used as their normal behavior. Not all people in the army did this, but I maintained a very manipulative mindset, cultivating behaviors and patterns to put these people at ease and to make them trust me. I became very good at it. Then came Iraq. I adapted to this. I thrived on it even, but I was fueled by a constant rage, an anxiety that never let up. I hid from my friends and family, I made myself into a good soldier, but hid even more of myself in favor of this. Then I came home. I went crazy for a while. I learned to deal with that crazy. I won't say I got better then, but I learned to handle the fact that important parts of my mind were just broken. Then I started hiking. And kept hiking. And kept hiking. Somehow I lost those barriers, the broken parts of my mind managed to repair themselves. I'm still the owner of all those experiences, but now I get to process them as a new person. I wonder what those who only have gotten to know me in the last few years will think. Major parts of me will remain, but a significant change has been effected in my persona, and I suspect many interesting, and probably significant, changes will occur in my external life, the life that includes my friends, the choices of education and career, of seeking out purpose. This will probably be hard. All the painful crap I pushed down and out of sight will have to be unearthed and integrated, and that will probably hurt. But I think I will welcome it.

Update 9/9/13: I'm now only 30 miles from the border. I'm feeling pretty good about this, but I have no idea how I'll feel when I get to the border. I'm going to try and put in 30 miles today, then it'll only be six to the border, and another eight to manning park, where I will return to the real world.

I want to stand as close to the edge as I can without going over. Out on the edge you see all the kinds of things you can't see from the center.
- Kurt Vonnegut