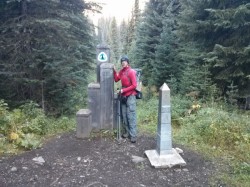 After 2660 miles and nearly four months of hiking, my Pacific Crest Trail adventure has come to an end. I feel great about this, not only because of my overwhelming sense of accomplishment, but also because it's just nice to sit on a couch in a state of relative cleanliness for a while. But at the same time, I am already starting to miss the trail. Every day that passes seems somehow too easy--I can drive ten miles to WinCo to do some shopping and ten miles back, and it amazingly doesn't take the better part of a day to travel that distance. After all that "roughing it," I really appreciate the conveniences and niceties of everyday life, but it somehow seems like cheating.

The final few days of my hike were spectacular. From Stevens Pass (where I last posted from Skykomish), I had only about 180 miles left. The rain cleared up in a day, and I was able to complete the last stretch in dryness. Or partial dryness--my sleeping bag remained damp throughout the rest of the trip. But despite this mild source of misery, I had a great time. Northern Washington is the hardest part of the state, with multiple 3000-foot gains. The Glacier Peak wilderness was especially tough. It reminded me of the Sierras. But with the additional challenge came beauty to match, and I was grateful for that.

The bridge crossing of the Suiattle River was destroyed in a flood a few years ago, but thankfully a new route has been established and I was not presented with any major difficulties in this area--apart from the additional five miles resulting from the reroute and a huge loss in elevation followed by a gain to match it on the other side of the bridge. But I was in such good shape at that point that I conquered it easily and still made 30 miles that day. I am still amazed at how healthy and fit this thru-hike has made me--things that formerly seemed impossible I was able to achieve on a daily basis.

My last food drop was in Stehekin, WA. This town (or small community, more appropriately stated) is in North Cascades National Park. There is a shuttle that runs from the PCT trailhead to the town of Stehekin, making resupply logistics easy. I picked up my box and ordered the "PCT Burger" at the restaurant there, which was by far the best burger I've had on the trail. Sauteed onions, mushrooms, and bell peppers, along with a fried egg and grilled ham steak. The whole thing was so big I could barely get my mouth around it. That, along with a basket of fries dipped in mayo for extra calories, would help fuel my final eighty miles to Manning Park, British Columbia. At Stehekin I again met Charlie, one of the hikers who had accompanied me into Seiad Valley when my left foot was aching. He had already finished and hiked back to Stehekin as this was his exit point--not Manning Park. I always marvel at his pack when I see him--it looks like a small book bag that a schoolboy would carry to kindergarten. He is definitely an adherent to the ultralight school. I have on more than one occasion heard him utter his motto, "Nothing weighs nothing."

This was it. The final stretch of the trail. No more food drops. Just the grub I had with me and two and a half days of hiking. I met an agreeable hiker named Uphill and hiked with him for the remainder of the trip. This was unusual for me--I had not hiked with other people for any significant amount of time. But Uphill and I had similar paces and made it work. I think we both enjoyed the company as we were both ready for it to be over and anxious to reach the end. Conversation always makes the miles go faster.

On our second-to-last day Uphill and I woke up late, intending to do thirty miles or so. But sometime in mid-morning, we got to talking about being done and decided to hike all the way to the border. Forty miles. The last time I made that many miles in a day was in Northern California, when I hurt my foot. It was a gamble, but I decided to join Uphill for this last big push to the end. We tore through it, making good time all the way. The only hold-up was the slides just south of the border, which required some careful navigation. Each one was a huge rut down the side of a steep hillside. Climbing down into them and back out was hard enough, but on top of that, we had to be cautious as a wrong step in this loose material could easily trigger another slide. On more than one occasion we started a mini-avalanche of gravel and dirt and slid back down to the bottom of the rut.

It started to get dark. We hiked on by flashlight. At 10:15 we reached the border monument. We were done. That was it. Hard to believe, but we were actually finished with our Mexico-to-Canada hike. We lifted up the metal monument and found the trail register. I shamelessly signed my name with my book-promotion website at the end, as I had done in most of the other registers, in a last attempt to make some sales. But I don't feel bad about it--I mainly just want to share the story of my 2010 no-resupply Oregon Section hike of the PCT, as chronicled in my book, THE STATE OF DETERMINATION.

We spent the night two-tenths of a mile into Canada, next to the closest water source. The following morning we hiked along the nine-mile connector trail to Manning Park and were REALLY done at that point. I was expecting a primitive campground with minimal services, but what we found was an all-out resort with showers, a hot tub, and a restaurant--all of which we took advantage of (yes, I ordered another burger--just couldn't get enough of them on this trip).

Uphill's family was going to pick him up and take him to their home in Olympia. They had an extra seat and offered it to me--I gratefully accepted. Saved me some bus fare back to Eugene, right? I spent the night in Olympia at my friend Wendy's house, and took Greyhound back to Eugene the next morning. I arrived home and plopped down on the couch--I think it was at least an hour before I moved at all. I was done.

This has been the greatest adventure of my life. I've learned a lot about hiking, but also a lot about life. When you spend four months only concerning yourself with the basics of survival--how much to eat and drink, where to sleep, how to deal with the elements, and how many miles to walk that day--you really gain perspective on this business of living. I realized that nine-tenths of the stuff I worried about in the "real world" was largely irrelevant and not worth the stress. I've decided to adopt the hiking life-stance and incorporate it into my everyday life. If it's not essential to my survival, I'm not going to lose sleep over it. I might think about it, but I'm not going to allow it to negatively impact my level of happiness. It's just not worth it.

So that's it. I'm done. Before I sign off, I'd like to again thank the folks who helped me in this endeavor, specifically my family for the unending support and specifically my mother, Cindy, who unfailingly mailed my boxes of food, ensuring a successful trip. I also received generous support from some great companies who provided me with food and gear. So thank you for everything Nature's Bakery, Bear Vault, Soyjoy, Tillamook Country Smoker, Backpacker's Pantry, and Zone Perfect. I appreciated the help and happily endorse your products and would recommend them to other hikers.

"What's next?" is the question I've been getting lately. The answer is, "I don't know." As much as I learned about myself and the world on this hike, I am actually not much closer to formulating a "life plan" than I was when I started. But I suppose that's okay--it just means that whatever happens will be an adventure rather than a predictable formula. At the very least, I'd like to hike the Continental Divide Trail and the Pacific Northwest Trail--both National Scenic Trails. But I'll probably complete them in sections rather than thru-hikes, as I will likely be unable to take so much time off. I've got classes at Lane Community College, plus an eventual career (I hope) as a mechanic, which is my current course of study. So I've just got to resign myself to being a section hiker. But that's okay--the PCT is "my trail" and I've now completed a thru-hike of it. So I'm satisfied.