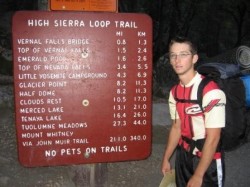 Wow, hiking the PCT is such a crazy adventure. I enjoy hiking, but I never really thought about trying to hike the whole PCT (or even half of it) until friends and family prompted me. At this point in life, now seems like a really good time. Come this spring, I will have been around the same company for 40 years! Started there in high school and then worked full time after graduation. These days I guess that's pretty weird. But hey, I've enjoyed the challenge and the variety. This spring I will be somewhat in-between projects, so this seems to be a good time to go hiking and not be missed too much. And I'm not getting any younger. Its great to get out from behind the desk and, as long as the blisters don't get me, I can still do some big miles.

All three kids are grown, graduated, married and starting families. The grandkids are a whole lot of fun, but still pretty young. My daughter, the youngest, graduated last month (You go Shel!). Unfortunately her graduation ceremony will be when I'm on the trail, but she's cool with that. Mel, my oldest son has rediscovered hiking last summer and has enough time available to join me for a section. He and another hiker friend or two want to do the John Muir Trail (JMT). They are planning on joining the party on top of Mt. Whitney and then heading north with me for 10 days. Anaiah, who previously did the JMT with me is going to help us out with resupply over Kearsarge Pass so I don't hold up Mel's JMT schedule with a resupply trip to Lone Pine.

In order to stay on my PCT schedule, I'll need to hit the Sierra early, leaving Kennedy Meadows Store in early June. (Kennedy Meadows Store is south of Whitney, same name, but different than Kennedy Meadows on Highway 108 near Sonora Pass.) So this makes an interesting timing situation. We need to pick a date so Mel and crew can get a Mt. Whitney permit, but that date needs to be early enough for me and not too early for them as there are some dicey sections on the Mt. Whitney trail coming out of Whitney Portal before the snow melts. The Mt. Whitney permit lottery starts February 1st. Permits are required when using the trail between Whitney Portal and Trail Crest (what I like to call the front-side). Since I'll be on the back side of Mt. Whitney with a PCT permit, I just need to include the free Mt. Whitney option on my PCT permit. Thankfully that permit has no date restrictions.

Living in the Sierra, I'd like to think we get a good feel for the snow conditions. Last year was pretty light. This year feels light as well, although the current stats are above average and March is still to come. Light snow years seem to come in pairs. Hopefully we will be able to make an early charge through the high snow covered passes. I know we need snow, but I hope it stays light in the JMT section.